The Global Alliance Powerfuels – a cross-sector alliance of companies and associations – has called on the member states of the United Nations‘ International Civil Aviation Organization (ICAO) to focus their climate protection and sustainability strategies on electricity-based, renewable fuels (powerfuels). In the beginning, the goal should be to decide on a worldwide quota of at least 2 percent for the blending of powerfuels. The costs for this would already be justifiable today. The price of an air ticket would increase in line with the blending quota: with an admixture of 2 percent by 2 percent, with 10 percent by 10 percent, with 50 percent by 50 percent. This is shown by an analysis pub-lished by the Global Alliance at the occasion of the 40th ICAO Assembly in Montreal, Canada.

Andreas Kuhlmann, spokesman for the Global Alliance Powerfuels and Chief Executive of the German Energy Agency (dena): „Powerfuels are the key to climate protection in aviation. The existing instruments for reducing greenhouse gas emissions in this sector are far from sufficient. The financing of climate protection measures in other sectors is only a compensation mechanism and the availability of sustainable biofuels for aviation is very limited. ICAO should therefore include powerfuels in its sustainability strategy and introduce blending quotas promptly. Individual states and regions should also take action to accelerate development, for example through their own quota regulations and incentive programmes for airlines, airports and fuel producers. For instance, the German government should seize the opportunity to use the planned increase in the aviation tax to promote the production of aviation powerfuels under the 2030 climate protection programme.“

The market for powerfuels is still in its infancy. The first projects to develop powerfuels production for air traffic are underway in countries such as the Netherlands, Norway and Germany. As the Global Alliance analysis shows, the market could grow rapidly due to a mandatory regional or even global blending quota. The price per litre would decrease rapidly and could fall to almost one euro by 2050.

Even at a cost of 2.40 euros per litre of powerfuel, which, according to estimates, could be achieved in the near future, emissions could be significantly reduced without making airline tickets considerably more expensive. For example, a typical holiday flight from Berlin to Mallorca costs 145 euros on average. With blending quota of 2 percent, the ticket would cost 3 euros more, with a blending quota of 10 percent 15 euros more. A long-haul flight from Berlin to Beijing for 525 euros would cost 11 euros more with a 2 percent share of powerfuel; with a 10 percent share, 53 euros.

In the view of the Global Alliance, the current framework conditions in international aviation are not suitable for providing effective incentives for the use of powerfuels. ICAO has set up the reduction mechanism CORSIA to guarantee that emissions from aviation will not increase further from 2020. However, the focus is on financing climate pro-tection measures in other sectors. This instrument could be further developed in such a way that investments in powerfuels would also become attractive. The next ICAO conference on alternative fuels in aviation should lay the foundations for this. However, pioneering nations should take action beforehand.

At national level, part of the revenue from aviation taxes and levies could be used for powerfuel programmes. European emissions trading includes aviation, but at a price of less than 30 euros per tonne of CO2, there are no incentives for the aviation industry to invest in powerfuels. Sweden and Norway are in the process of introducing blending quotas for biofuels in aviation fuel. Such quota rules should be extended to powerfuels.

In its new climate package, the German government has announced that it will improve the framework conditions for the production of electricity-based fuels. The introduction of a quota for powerfuel-kerosene is also under discussion. However, the increase in air traffic tax announced at the same time should not be used exclusively for rail transport, but also for the promotion of the first powerfuel-kerosene plants. Together with the federal states, industry and trade unions, the federal government has also set itself the goal of launching an industrial policy initiative for powerfuels in the European Union. This is the message of the Leipzig statement on the future of aviation presented by the German stakeholders in August. The Global Alliance expressly supports this project.

The „Powerfuels in Aviation“ analysis and further information on the Global Alliance Powerfuels can be found online at www.powerfuels.org.

Powerfuels are gaseous or liquid fuels and raw materials that are produced with the help of electricity from renewable energies such as wind or solar power. The electricity drives an electrolysis process that produces hydrogen from water. The hydrogen can either be used directly or further processed into energy sources that can replace gas or oil as required, be it as fuel in transport or for heat and electricity generation or as raw material in the chemical industry. The conversion processes are known under terms such as power to gas and power to liquid.

The Global Alliance Powerfuels aims to build a global market for electricity-based fuels from renewable energy sources. It provides information about the potential, makes recommendations for the development of suitable framework conditions and initiates pilot projects. It was founded at the end of 2018 by internationally operating companies and associations from the energy and renewable energy, automotive and aviation, chemical and petroleum industries, as well as mechanical and plant engineering sectors. The German Energy Agency (dena) coordinates the activities of the Global Alliance as the initiator. 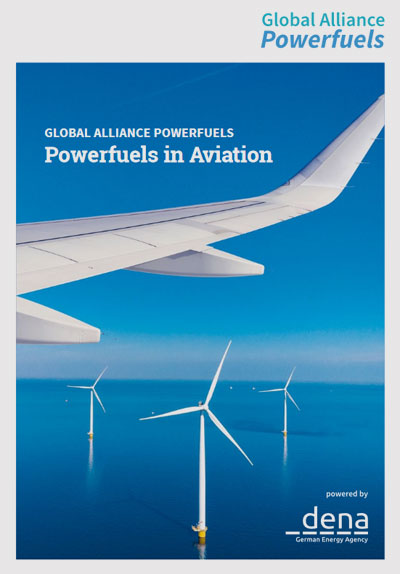