Discrepancy between passenger vehicle type-approval test results and in-use fuel consumption and carbon dioxide (CO2) emissions at 42 per cent, with first indications of a possible slowdown in the growth of the gap.

The average gap between official fuel consumption figures and actual fuel use for new carsin the EU has reached 42 per cent, according to the latest update by the InternationalCouncil on Clean Transportation (ICCT) to its on-going research into vehicle fuelconsumption and CO2 emissions.

Since 2001, the discrepancy between official measurements of vehicle efficiency and actualperformance of new cars in everyday driving has more than quadrupled—a discrepancy thattranslates into €400 per year in extra fuel costs for the average vehicle. As a result, lessthan half of the on-paper reductions in CO2 emission values since 2001 have been realizedin practice.

A companion analysis by the ICCT indicates that similar gaps between official and real-worldCO2 emissions exist in China, Japan, and the United States. “However, since 2001 Europehas seen the largest increase in the gap,” says Dr. Peter Mock, Managing Director of ICCTEurope.

This update, jointly prepared by the ICCT and the Netherlands’ Organisation for AppliedScientific Research (TNO), describes the increasing real-world efficiency gap usingstatistical analysis. “We analyzed data for more than 1.1 million vehicles from eightEuropean countries, and all data sources confirm that the gap between sales-brochurefigures and the real world has reached another all-time high,” says Uwe Tietge, a researcherat ICCT Europe and lead author of the study. “When we published our first study in 2013,the gap had widened over ten years from roughly 10 per cent to around 25 per cent. Now ithas increased to 39 per cent for private cars, and 45 per cent for company cars.” For the firsttime, the update notes a slowdown in the rate of increase in the gap, in particular for company cars. “But it is too early to tell whether the gap will flatten off.” emphasizes UweTietge.

Manufacturers measure vehicle fuel consumption in a controlled laboratory environment.Since September 2017, a new test procedure, the Worldwide Harmonized Light VehiclesTest Procedure (WLTP), has to be followed for new vehicle types. From September 2018onwards it will become mandatory for all new vehicles. The ICCT researchers expect thatbecause the WLTP more accurately reflects real-driving conditions it will help cut the realworldgap approximately in half. “But even the new test procedure contains new loopholesthat could permit the performance gap to increase again in the future,” warns Dr. Mock.“Further actions are therefore required, in particular on-road testing of fuel consumption andCO2 emissions under real driving conditions and a not-to-exceed limit for the real-world gap,as it already exists for air pollutant emissions today.”

The United States demonstrate how a comprehensive set of policy measures can help tocontain the real-world gap. “In the U.S., independent surveillance testing of actual vehicleson the road has been standard practice for many years,” says Uwe Tietge. “It is no surprisethat the increase in the real-world gap has been much lower in the U.S. than in Europe. Infact, the fuel consumption values communicated to consumers in the U.S. paint a veryaccurate picture of the average real-world fuel consumption.”

On November 8, the EU Commissioner for Climate Action and Energy, Miguel Arias Cañete,is expected to announce a regulatory proposal for reducing CO2 emissions of new cars andvans for the 2020–2030 time period. It remains uncertain whether the Commission’sregulatory proposal will also include policy instruments to tackle the discrepancy betweenofficial and real-world CO2 emission levels. 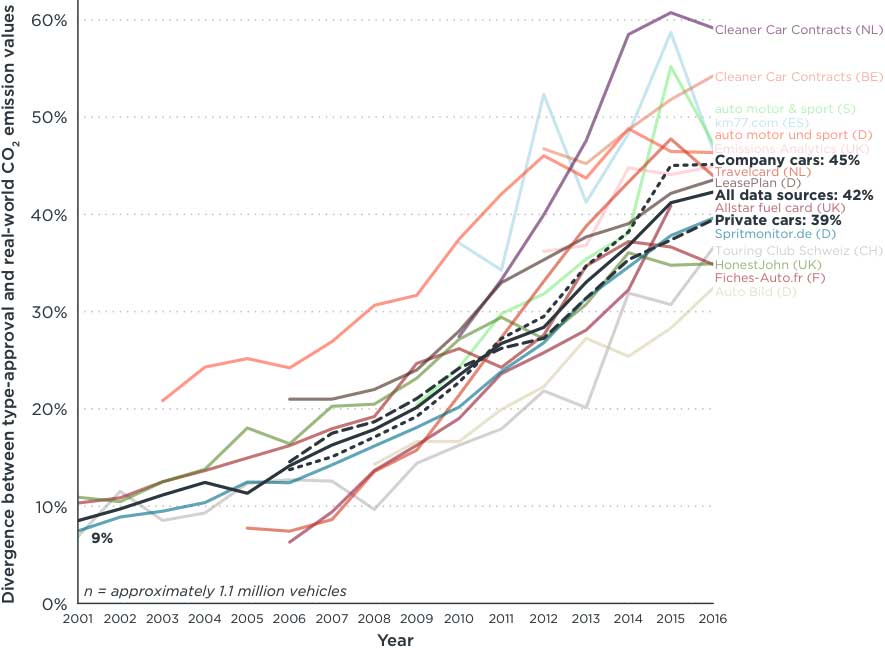