The sixth edition of the Customer Barometer for Renewable Energies reveals Swiss consumers’ attitudes towards energy issues. The results of the study are available online.

Solar prosumers: producing power themselves
More and more house owners are interested in becoming power generators themselves by means of solar panels on the roof. This trend towards “solar prosumers” – consumers who are at the same time also producers – might increase in the future thanks to the growing dissemination of decentralised battery storage. By storing solar power from their own roofs, households will be able to become more independent of their power suppliers. 65% of the interviewees welcome this. 74% of the interviewees are of the opinion that battery storage can revolutionise power supply. Although only 21% of the interviewees think that an investment in battery storage is already profitable today, there is a widespread expectation that storage system prices will fall – similarly to what has happened in connection with solar panels in the last few years.

Market opportunities for the cantons’ building energy certificate
A further focal point of the survey was the energy efficiency of buildings. This reveals differences in people’s familiarity with various standards and labels. Whereas established brands such as Minergie are widely known (93%), only 29% are aware of the canton’s building energy certificate (GEAK). However, a low awareness level does not mean that consumers are not interested in such certifications. A majority of the interviewees (59%) are in favour of compulsory building certification. This favourable attitude is stronger among tenants (66%), who may hope that certification might result in lower energy costs, than among owners (50%). Increasing familiarity with the GEAK may also lead to a situation whereby this instrument will attract attention among house buyers and tenants which is similar to that accorded to the energy label on household appliances: whereas at present, only 32% of the interviewees say that they take the energy efficiency label into consideration when buying a house, this percentage is already 84% when it comes to buying a refrigerator.

Quo vadis, Swiss energy policy?
Whereas the population’s interest in the issues of renewable energies and energy efficiency is great, 59% of the interviewees regard the lack of political support as one of the main causes of the relatively hesitant implementation of the Energy Strategy 2050 in Switzerland. The plan of the Federal Council and of Parliament to replace the current funding system by incentive taxes on electric power and fuels after 2020 does not find widespread resonance among people. 29% of the interviewees find the change from funding to an incentive tax a good idea, 16% would prefer to keep today’s system of promoting renewable energies through feed-in remuneration, and another 25% find both systems good – the main thing being that the development of renewable energies is making progress. Only 9% of the interviewees oppose both incentive taxes and today’s system of cost-covering feed-in remuneration. 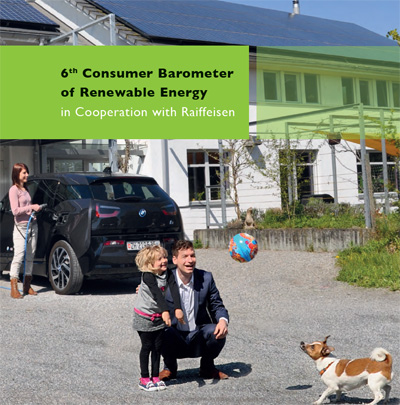