New Ipsos global study shows nearly half of people in 10 European countries think things across the EU are on the wrong track – but less pessimistic than in 2017. 44% say they are not very interested in the upcoming European Parliament elections. Worldwide, half think the European project as a whole has made Europe stronger.

Half of Europeans across 10 countries believe things across the European Union are on the wrong track, according to a new Ipsos poll. The new online poll conducted amongst adults aged under 75 in 28 countries worldwide, including Belgium, France, Great Britain, Germany, Italy, Spain, Hungary, Poland, Serbia and Sweden in Europe, shows 48% say things across the European Union are off on the wrong track, although this is an improvement from 57% two years ago. This compares with just over a quarter (28%) saying things are heading in the right direction (up 7 points) and another quarter (25%) who say they’re unsure.  The most pessimistic countries are Italy (57% wrong track), France (54%), and Britain (52%), while Poland (40%) and Spain (41%) are less negative.  Nevertheless, with the exception of Germany each country has become less pessimistic than in 2017.

Furthermore, the survey also shows that nearly half of Europeans (45% on average across the ten countries) believe that the rules of the EU are rigged to advantage the rich and powerful, with aspiring member state Serbia (65%) most likely to believe this followed by Belgium and Italy (both 50%) – those in Poland and Sweden are least likely to think this (both 38%). Half (52%) also believe that the leaders of the EU don’t care about people like them with Serbia (58%), Belgium (57%) and France (56%) most likely to believe this and Germany (48%) and Poland (47%) least likely.

With the European Parliamentary elections on the horizon, the new Ipsos poll reveals half (50%) of the public in the nine EU countries say they are interested in the upcoming elections (44% say they’re not). Italy, Poland and Hungary are the countries with the most interest (65%, 63%, and 56% respectively) while the French, Belgians and the British are among the least interested (44%, 41%, and 36% respectively). On the elections the survey also finds:

Has the European project been a success?

The new Ipsos survey also asked participants to take a long view about the success of the European project since 1957.  Across all 28 countries worldwide, people think the European project has had more successes than failures (by 29% to 15%), through since 2017 there has been a rise in those thinking the successes and failures balance out (from 26% to 32%).  Poland (43%) and Hungary (40%) are the most positive nations within the EU, with Belgium (19%), Italy (18%) and France (17%) being the least.

Taking everything into account, half worldwide (51%) think the European project has made Europe stronger today than it would have been without it and 14% think that it’s made Europe weaker.  Within the EU, those in Poland (62%) and Sweden (58%) are most likely to say the EU has made Europe stronger while those in Italy (37%) and France (31%) are least likely to say this.  Countries in the EU on average though tend to be a bit more critical than those in the rest of the world (by 19% to 11%); in particular India, South Africa and countries in Latin America are more positive about the impact of the European project. 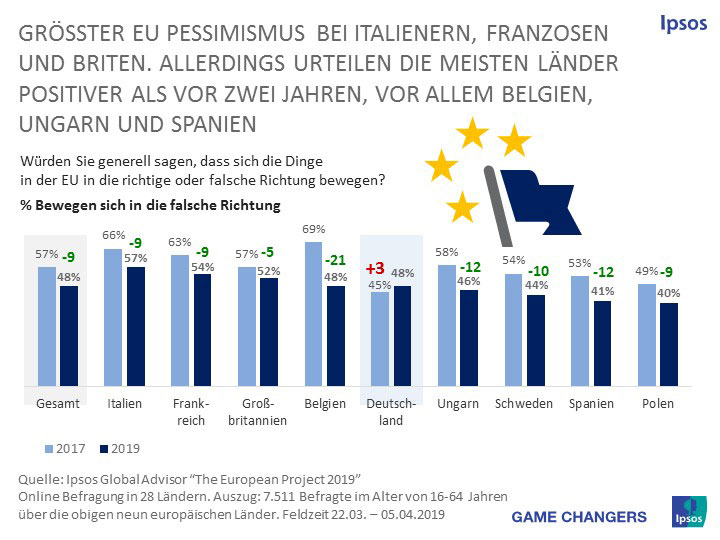