A smarter scenario – Club of Rome report states that inequality reduction and new economic models are necessary for long-term economic and planetary stability.

Only a profound economic transformation in the next decades driven by “non-conventional policies” is likely to deliver prosperous societies within planetary boundaries, according to a new scientific report.

(pdf, 2.8 MB), commissioned by the Club of Rome for its 50th Anniversary, updates the think tank’s legendary first report, Limits to Growth, published in 1972, which predicted severe economic turbulence in the 21st century without action to constrain environmental resource use.

“Most of the Limits to Growth’s original conclusions still hold true. While this is scientifically satisfactory, for societies it’s not,” says centre researcher Johan Rockström, an author of the report and Director Designate of the Potsdam Institute for Climate Impact Research.

At the base of the report are the UN’s Sustainable Development Goals. The authors explored four future scenarios to examine how the world can successfully meet the 17 goals relating to poverty, health, energy and the environment by 2030. The key twist is how to meet these goals while also remaining within planetary boundaries – beyond which Earth’s vital systems could become unstable.

The scenarios the team explored ranged from sticking with existing economic policies that deliver relatively slow growth rates but have successfully reduced poverty, to introducing policies for economies to grow faster, or a third scenario of introducing stronger policies to meet individual objectives relating to poverty, education, health or energy. But only the fourth and final scenario explored by the team brings long-term success.

We found one scenario that can deliver both for humanity’s goals and for the planet. The solution rests in a shift to non-conventional policies and measures. The world needs transformational change

Per Espen Stoknes, the Norwegian Business School in Oslo, co-author of the report

The fourth scenario, dubbed “the Smarter Scenario”, included five policies that, if implemented can meet the goals. They are:

“We believe this transformational scenario is feasible. Market forces are showing signs that they can drive a new energy revolution through the global economy. Technologies also exist for sustainable agriculture. But inequality will be the hardest nut to crack, politically,” David Collste a researcher at Stockholm Resilience Centre.

The analysis is based on a new computer simulation, Earth3, that uses economic and social data from the last four decades to explore what is in store in the coming decades. The conclusions will be presented on 17 October at the Club of Rome’s 50th anniversary summit in the Italian capital.

The report has been produced by the Stockholm Resilience Centre and Norwegian Business School in Oslo. It was funded by the Global Challenges Foundation. 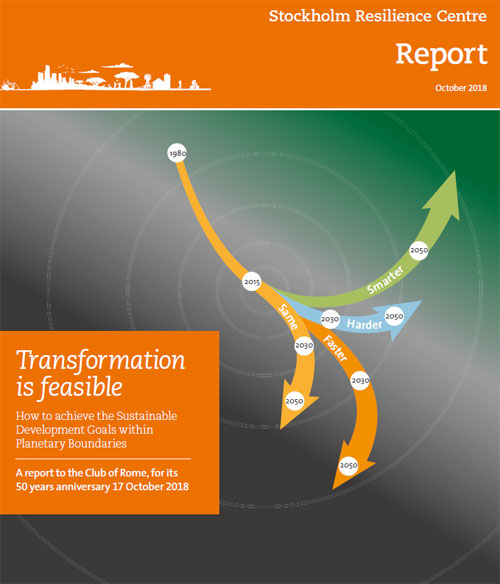