The vast majority of European countries are missing the mark and failing to increase our chances of achieving the goals of the Paris Agreement.

Too few of them are advocating for ambitious climate and energy targets and policies, and too many are lagging behind in reducing carbon emissions at the level needed to implement the Paris Agreement. That is according to a new ranking published today by Climate Action Network (CAN) Europe.

The report, ‘Off target: Ranking of EU countries’ ambition and progress in fighting climate change’, assesses both the role that Member States play in setting ambitious climate and energy targets and policies, and what progress they are making in reducing carbon emissions and promoting renewable energy and energy efficiency at home.

The ranking comes at a decisive time, as in parallel to the adoption of 2030 energy legislation, the EU also needs to start seriously preparing for the next climate summit COP24, when countries are expected to commit to put forward more ambitious 2030 climate targets by 2020. The upcoming Petersberg Dialogue and the Franco-German Summit in Berlin, the Ministerial on Climate Action in Brussels, and the Environment Council in Luxembourg offer opportunities to add momentum for increasing the level of ambition.

The report shows that no single EU country is performing sufficiently in both showing ambition and making progress in reducing carbon emissions. For this reason, the top position of the ranking is unoccupied.

The five EU countries that score the highest are Sweden (77% of the points), Portugal (66%), France (65%), the Netherlands (58%) and Luxembourg (56%), thanks to the fact that they are advocating for more ambitious climate targets at EU level. At the same time, it is clear they still have to do much more to reduce emissions and promote renewable energy and energy efficiency at home.

Aside from this group, a vast majority of Member States scores less than half of the possible points, which shows they are not progressing fast enough towards the Paris Agreement goals. The ranking exposes Denmark (49% of the points), Germany (45%), the UK (37%) and Belgium (35%) for no longer being at the forefront in the fight against climate change and aiming rather low despite their relative wealth. Estonia (24%), Ireland (21%) and Poland (16%) rank lowest because of their stiff opposition to climate action nationally and in the EU.

“Sweden, Portugal, France, the Netherlands and Luxembourg score highly because they recognise the importance of ensuring that EU climate policy is ‘Paris Agreement-proof’. The lack of willingness to act on climate among all other Member States is underwhelming. While all EU countries signed up to the Paris Agreement, most are failing to work towards delivering on its objectives. Countries urgently need to improve their ranking by speaking out and acting in favour of more ambitious climate and energy policies and targets domestically and at EU-level.”

“It is great that Portugal is a frontrunner in climate ambition, which is aligned with the carbon neutrality goal to be achieved by 2050. The only drawback of this climate performance is the intention to start oil and gas drilling in onshore and offshore concessions.”

“It’s becoming very clear these days that Germany has gone from being world champion in climate action to a third division team. Germany has to urgently step up both its climate ambition and the national measures underpinning the targets. It should team up with France and other progressive member states to finally start shaping the European energy transition.”

“France has been a very active player in defending the Paris Agreement’s implementation in Europe and calling for more climate action. However, France still seats on the sidelines domestically. It needs to urgently translate its European ambition at home by unlocking the huge potential of the ecological transition.”

[2] Calendar of upcoming opportunities to reconsider the level of EU’s ambition: 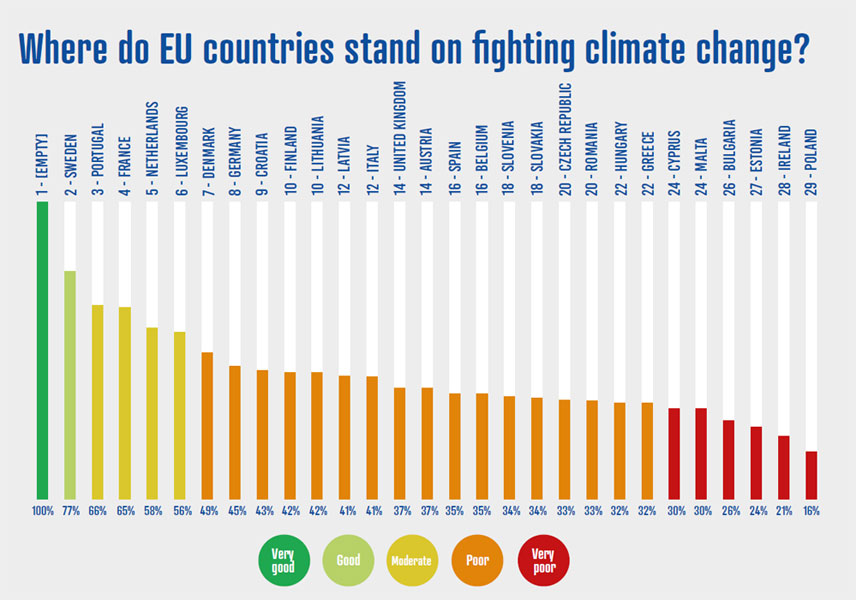