On 21 December, representatives of the Estonian Presidency and the European Parliament reached a provisional deal on the effort sharing regulation to ensure further emission reductions in sectors falling outside the scope of the EU emissions trading system (ETS) for the period 2021-2030. The provisional agreement requires endorsement by member states. EU ambassadors are expected to analyse the text in January.

This agreement is another big step for the EU towards fulfilling its Paris climate commitment of a 40% cut in greenhouse gas emissions by 2030 compared to 1990 levels.

Non-ETS sectors need to reduce their emissions by 30% by 2030 compared to 2005 levels to meet this EU target. The new regulation sets out binding national targets and puts in place the necessary framework for effort sharing sectors, including buildings, agriculture (non-CO2 emissions), waste management, transport (excluding aviation and shipping) and industry (i.e. industry, energy supply and product use), to reach the non-ETS sectors contribution in 2030.

Both co-legislators agreed on a robust text with a special focus on three main chapters: targets, flexibilities and compliance. The central elements of those fields in the text are as follows:

Each member state will have to comply with a binding annual emission reduction target for the period 2021-2030. These targets are calculated on the basis of gross domestic product (GDP) per capita ranging from 0% to 40% below 2005 levels and are in line with the 30% EU reduction target for non-ETS sectors.

An emissions reduction path is established for member states to make sure they decrease emissions at a constant pace throughout that period. The starting point will be based on the average emissions from 2016 to 2018 as proposed by the Commission with the start of the trajectory calculation at 2019 and 5 months (five twelfth’s of distance from 2019 to 2020) or in 2020, whichever results in a lower allocation for that Member State.

A safety reserve with a total of 105 million tonnes of CO2 equivalent is created and will be available in 2032. It is intended to help less wealthy member states which may have difficulties reaching their 2030 targets despite exceeding their targets in the current 2013-2020 period. These member states are required to use the other available flexibilities prior to using this reserve. Strict conditions also apply, for instance the reserve will be accessible only if the EU attains its 2030 target.

Current flexibilities under the effort sharing decision are preserved to help member states attain their annual limits. They will be able to bank, borrow and transfer annual emission allocations between countries from one year to another within the 2021-2030 period.

Two new flexibilities are introduced in line with European Council guidelines. The one-off ETS flexibility will allow member states which did not receive free allocation for industrial installations in 2013, or which are required to fulfil emission reduction targets above the EU average and their reduction potential, to cancel a limited number of EU ETS allowances. The LULUCF flexibility will enable member states to make limited use of net removals from certain land use, land use change and forestry. This will also include credits from managed forest land once the forest reference levels have been adopted under the LULUCF regulation and from wetlands when accounting for them becomes mandatory under that regulation.

Given the exceptional circumstances of some member states, namely Latvia and Malta, the small additional adjustment of two million tonnes CO2 equivalent suggested by the Council has been maintained and will be added to their allocation in 2021.

To ensure compliance by member states, existing annual and biennial planning, reporting and other monitoring obligations are foreseen together with two compliance checks over the 2021-2030 period.

Timeline and next steps

The European Commission presented two proposals on the sectors not covered by the ETS – effort sharing and LULUCF – in July 2016 on the basis of the guidelines provided by the European Council in its October 2014 conclusions.

Given the links between the two proposals, ministerial discussions on non-ETS sectors took place in parallel. These files were on the agenda of three Environment Council meetings before a negotiating position was agreed: a policy debate on 17 October 2016, a state-of-play briefing on 19 December 2016 and a progress report in June 2017.

The Council reached its general approach on 13 October and started negotiations shortly thereafter with the European Parliament, which adopted its position on 14 June during its plenary session.

Three trilogues were held on 26 October, 21 November and 13 December before concluding negotiations today. The provisional text will be presented to EU ambassadors today and they will analyse it for endorsement on behalf of the Council in January.

Once the Council and the Parliament formally adopt the act, the new legislation will enter into force 20 days later after its publication in the EU Official Journal. 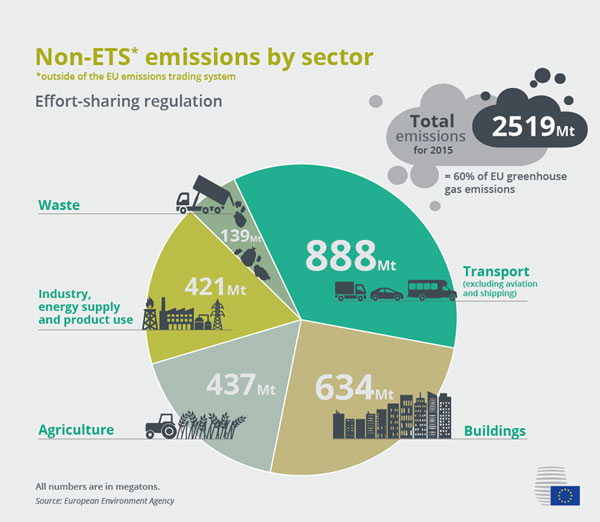