The amount of energy produced by renewable sources ebbs and flows. The Fraunhofer Institute for Industrial Mathematics ITWM has found a smart work-around for these fluctuations.

Houseboats have long been a fixture of cityscapes in the Netherlands. Many grace Amsterdam’s waterways, but a new neighborhood in the city features a breed of floating home that is nothing like the traditional Dutch houseboat. Equipped with a sophisticated renewable power supply, these 30 waterborne homes are largely self-sufficient. The grid operator laid just a single shared power line to the quayside community. This narrow-band feed serves as a backup to furnish remote power on cloudy days.

A Management System for Energy Communities

The Fraunhofer Institute for Industrial Mathematics ITWM and its partners in an ERA Net Smart Grids Plus project called »Grid Friends« developed the energy management system that enables this kind of autonomy. »We built on our energy management system for individual houses to develop a system for entire energy communities,« says project manager Matthias Klein. »It controls photovoltaic systems and heat pumps, and recharges home and electric car batteries, thereby also supporting sector coupling.« Furnishing enough energy to everyone in the neighborhood – all the time, even on dark days and without overtaxing the shared power line to the public grid – is no simple matter.

This energy management system’s structure is modular – each module may be installed individually. Collectively, they serve as a communal energy hub. This hub is always analyzing the situation to determine where the energy needs to go. The 30 photovoltaic systems, heat pumps and batteries each installed in the Amsterdam neighborhood’s individual houses work as one large system. A case in point: House A’s residents are on vacation, so it draws very little electricity. Consumption in house B is spiking, perhaps because its residents are throwing a party.

The management system reroutes house A’s solar power to cover house B’s needs, the idea being to make the most of local power and sourcing the least possible amount of remote power from the public grid. The system taps the home battery when it is dark outside and the solar unit is not generating electricity. It can do this from home to home.

The management system endows every module with discrete intelligence. This has several benefits. One is that the home batteries’ smart controllers enable the photovoltaic systems to operate to their full capacity. This is unusual. The law limits photovoltaic systems’ infeed on very sunny days. Otherwise, the installed systems’ output would overload the grid. This is why standard PV units have to be throttled just when the sun is brightest and they could generate lots of electricity. The energy management system works around this problem by rerouting the surplus electricity that grid operators do not want to buy, and storing it in the home battery for later use.

A forecasting model boosts these batteries’ efficiency. The model factors the weather forecast into its predictive equation. First, it determines how much energy the photovoltaic systems are expected to produce in the hours ahead, and how much heat is likely to be consumed. Then it applies the results of these calculations to regulate storage. For example, the PV systems run at less than full capacity when the morning sky is hazy. If the weather is expected to clear up by the afternoon so that the systems’ output would have to be throttled, the energy management system will not start storing power in the morning, instead holding off until later to charge batteries. In other words, rather than following the standard practice of charging the batteries with the first kilowatt hour of electricity produced during the day, this system waits until more energy is on tap. The batteries will still be fully charged by evening, but without any solar power going to waste.

Electric cars’ batteries also need charging, and the best time to do that is when PV systems are generating plenty of electricity. However, an empty battery is not a welcome sight for drivers who need to run urgent errands. »Residents can determine the minimum charging levels for their cars simply by clicking in an app,« says Klein. Fifty percent may be enough for someone who only needs the car for a quick grocery run. The system recharges the battery to the level specified by the owner when the car is plugged in. If necessary, it will fall back on electricity from the public grid. The system will continue charging beyond this level if it is sunny outside. If not, it will wait until energy production picks up again to top off the battery. The benefits are twofold. For one, this solar self-consumption brings down the electricity bill. For the other, every watt of surplus energy that is routed to local batteries rather than exported lightens the public grid’s power load.

An Option Not Just for Large Communities

These modules may also be deployed individually and tailored to the given application. »There is already a permanently installed base of 60 to 70 of our systems ranging from private households and cafeterias to entire businesses and one sewage treatment plant. While the Amsterdam system shifts peak power outputs of up to 250 kilowatts, the industry versions in place so far control 150 kilowatts,« says Klein. Wendeware AG, a Fraunhofer ITWM spin-off, has been selling the system since early 2019. 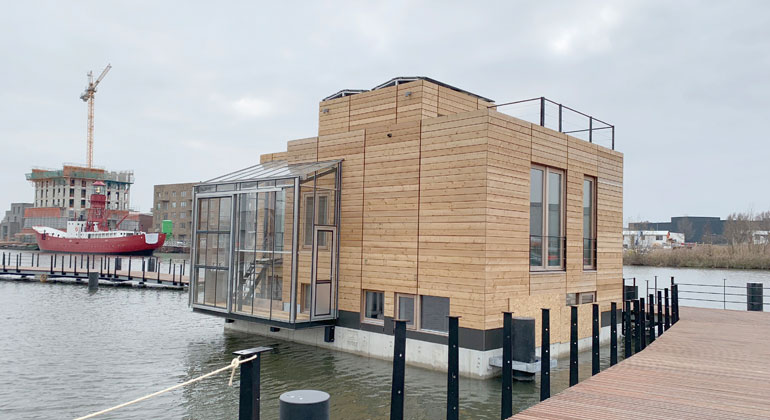