New evidence shows that the “Ecological Focus Areas” introduced under the EU’s Common Agricultural Policy (CAP) greening rules can provide a lot more, for both nature and farmers.

The EU introduced the new “greening” instrument into the Common Agricultural Policy in 2015, with the intention to slow the rapid loss of biodiversity in agricultural areas. The idea is quite simple: in return to the subsidies they receive, farmers must now implement measures to protect wild animals and plants on their land. A group of scientists from the Helmholtz Centre for Environmental Research (UFZ), the University of Göttingen and other German, Austrian and French institutions examined how effective the flagship greening measure called “Ecological Focus Areas” actually is. Their conclusions, now published in the scientific journal Conservation Letters, are sobering: Ecological Focus Areas are implemented in a way that provides little benefit for biodiversity or farmers, and yet come at a high price to tax payers. However, there are many possibilities to improve the measure for the benefit of all sides.

Skylark populations are nosediving, bumblebees and butterflies are disappearing, and even the once-common bright blue cornflower is becoming a rarity in Central Europe. The biodiversity of European farmland has declined markedly in recent decades. In an attempt to stop this decline, the EU introduced a new instrument in the last reform of the Common Agricultural Policy (CAP). With new “greening” requirements, since 2015 farmers have had to implement certain environmental protection measures in return for the payment that they receive (which, in Germany, is around 86 Euro per hectare).

What is greening?
There are three main elements to greening. One is maintaining permanent grassland. The second is increasing the diversity of crops planted: farms with between 20 and 30 hectares of arable land must plant at least two different crops, and larger farms must have at least three crops. The third, flagship measure of greening, is the requirement for farms with more than 15 hectares of arable land to dedicate at least 5 % of it to “Ecological Focus Areas” (EFA).

The EU has prescribed 19 different types of land use that may count as EFA. Farmers can, for example, leave land lying fallow, create buffer strips without agricultural production along water bodies, or maintain landscape elements such as hedges or ponds. They may also plant legumes like peas, beans or lupine, which fix nitrogen from the air into the soil. Or they can plant ‘catch crops’ like mustard or rape-seed to cover the soil surface over the autumn and winter to prevent soil erosion between harvest and the next planting. “Each Member State chose which of the 19 options is eligible for that country or region, but each farmer makes the final decision about which option he or she will implement” explained Guy Pe’er, the lead author of the paper.

Quite a few farmers objected this new instrument, criticising the EU for creating yet more regulations that are too complicated to implement. Ecologists, in turn, don’t consider the Ecological Focus Areas ambitious enough. These discussions are now beginning to heat up again in preparation for the mid-term review of greening, which will take place in March 2017. This will be a major opportunity to change some of the requirements.  However, we need to know how Ecological Focus Areas perform in reality.

Greening under scrutiny
Researchers from the UFZ, together with colleagues at the Universities of Göttingen, Vienna, Bern, Klagenfurt and Toulouse, as well as the Institute for Agroecology and Biodiversity in Mannheim, have scrutinized the performance of Ecological Focus Areas. “We wanted to know, first of all, what experts think of EFAs in terms of biodiversity”, said Pe’er. The team collected responses from 88 experts in agricultural ecology from 17 European countries. These experts judged the effects of the different EFA options on animals and plants, on a scale from plus 5 (very positive) to minus 5 (very negative).

“The experts gave highest scores for buffer strip and for leaving the land fallow, indicating that these options are highly profitable for biodiversity”, said Guy Pe’er. Landscape elements like hedges or traditional stone walls were also considered by the experts to have positive effects for many species. On the other hand, several options were judged as quite ineffective. “Catch crops or nitrogen-fixing crops like legumes don’t benefit biodiversity much, especially if farmers use pesticides on these areas”, said Pe’er.

“However, these two options proved to be highly popular among farmers”, added the agricultural economist Sebastian Lakner of the University of Göttingen. This was the finding of the second part of the study, in which the researchers analysed data from agricultural ministries in eight EU member states, as well as from each of the German federal states. Their results showed that around 45 % of the EFA in the EU is used for growing nitrogen-fixing plants. A further 27 % is used for catch crops: in Germany, this option makes up as much as 68 % of EFA.

Fallow land, covering around 21 % of EFA, was the only option that was considered by both ecologists and farmers as worthwhile implementing. In contrast, very few farmers chose buffer strips or landscape elements, which can be highly beneficial for biodiversity. “In other words, there was a poor matching between what ecologists recommend and what farmers implement”, summarised Guy Pe’er. This means that overall, currently around three quarters of all EFA in the EU is managed in a way that brings little or no benefit for biodiversity. “We don’t lay any blame on the farmers for this” emphasises Sebastian Lakner. “They are simply making the most economically rational decision and trying to minimise the risks involved”. Cultivating catch crops and nitrogen-fixing plants is very attractive because they are simple and cheap to manage. Buffer strips and certain landscape elements, in contrast, are more expensive and even time-consuming to maintain. In some cases, there are also administrative barriers, for example if parts of the same hedge belong to different farmers. Most importantly, several EFA options are made unattractive by the complexity of EU regulations attached to them. For example, farmers must register the exact width of a flowering strip. “Many farmers fear, unfortunately rightly, that any error in calculating the width of a strip could lead to sanctions by the authorities”, explained Sebastian Lakner.

How can greening be improved?
Both farmers and ecologists are unhappy with the current greening rules. The researchers think that the taxpayers should be too: “while Member States spend a lot of money on agricultural subsidies, society still gets very little back in terms of biodiversity”, said Sebastian Lakner.

Only extending the area of EFA from five to seven percent of arable land, as currently being discussed by the EU Commission, will not be enough to significantly improve the situation according to the scientists. So how can the measure be changed to improve the situation for all involved? The researchers provide several mid- to long-term recommendations. First, they suggest, the EU should promote those EFA options that bring the greatest benefit for biodiversity, such as buffer strips and landscape elements, and remove, or at least limit the extent, of less beneficial options like catch crops. “Reducing the number of options by removing less useful options would also make the greening simpler, as has been justly demanded by farmers”, said Yves Zinngrebe of the University of Göttingen, who coordinated the study.

Additional recommendations were to ensure that buffer strips are included in the list of eligible options in all member states, which is not the case at the moment. “Finally, it is of course essential to forbid the use of pesticides on EFA”, said Guy Pe’er. “It makes no sense to harm biodiversity in areas that are explicitly designated to protect it”.

The researchers also question if greening is, in fact, the right approach to stop biodiversity loss in our countryside. At EU level there are also agri-environment programmes that aim to promote ecologically sensitive farming, tailored to different types of habitat. “It is an established policy instrument that is based on positive incentives rather than undesirable regulations, and often performs quite well in achieving its stated goals, so there is a lot one could learn from them”, said Yves Zinngrebe. “They are also cheaper than greening”, added Sebastian Lakner, “so in the long run, expanding the budgets for targeted agri-environment programmes may actually be the most effective way forward”.

“Whether through greening or agri-environmental programmes, all authors and many of the experts that contributed to this study share the opinion that budgets for environmental protection must be dedicated more to measures that are known as highly effective for biodiversity, cover sufficient extents of arable land and grasslands, and are agreeable and practical for farmers to implement”, concluded Guy Pe’er. “We therefore hope that our recommendations will therefore be taken note of in Brussels and by the Members States”. 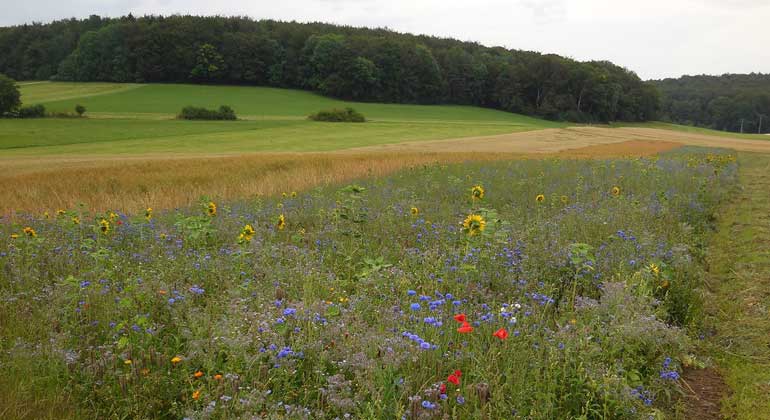