What factors influence the spread of invasive animal species in our oceans? The Asian shore crab as an example of invasive species successfully spreading to the North Sea and Baltic.

This question was the focus for a team of experts from the Alfred Wegener Institute, Helmholtz Centre for Polar and Marine Research (AWI), Bangor University (Wales, UK), and the University of Greifswald’s Zoological Institute and Museum in the context of the DFG-sponsored Research Training Group 2010 RESPONSE (Biological Responses to Novel and Changing Environments). The results of their study have just been released in the journal “Ecography”.

Crustaceans dominate the food webs of many costal habitats in our oceans. In addition, as ‘stowaways’ on board of vessels used in global shipping, many crab species have spread far beyond their natural homes. The Asian shore crab Hemigrapsus sanguineus is a good example of these invasive species: in just a few decades this species, native to the Pacific, has spread to many corners of the globe. By the 1980s, it had made its way to the Atlantic coast of North America, and by the 1990s, had gained a foothold in the coastal waters of Europe. In both North America and Northern Europe, this species is spreading farther and farther north, toward the rapidly warming polar waters. In the ecosystems they invade, these crabs can soon reach such high numbers that native species like the European shore crab Carcinus maenas are impacted or displaced. Furthermore, they exert considerable predation pressure in their new homes, often decimating e.g. marine invertebrates like mussels or young shore crabs, and taking these food sources away from other species in the process. This can produce lasting changes to the invaded ecosystems.

But how is climate change influencing the spread of invasive marine species? Invasive species are often characterised by a high tolerance for fluctuations in environmental factors like temperature and salinity, thus being more adapted to the effects of climate change in the oceans. The team of researchers, including members from the Alfred Wegener Institute, Bangor University (Wales, UK) and the University of Greifswald, especially focused on the early developmental stages of the Asian shore crab, and examined its microscopically small larvae, which grow as they float in the water column. Since it has been confirmed that the larvae of many marine organisms are more sensitive to environmental fluctuations than their adult counterparts, these larvae often represent a ‘bottleneck’ in the establishment of new populations.

In addition, the study sought to develop models for predicting the speed at which the Asian shore crab could spread northwards, taking climate warming into account. The project’s main question: Are findings regarding seasonal influences on larval development helpful for such forecasts? In the study, the team began by measuring the larvae’s developmental parameters, e.g. the survival rate and time needed for development at different water temperatures. For this purpose, at the AWI’s facilities on Helgoland they studied the duration of their young developmental stages in the lab; and they investigated the occurrence of crab larvae in the field. With the aid of a mechanistic model, the authors were then able to determine the timeframe during the mating season in which the water temperature needs to be above a certain threshold in order for the larvae to successfully develop into juvenile crabs. This modelling indicates considerable potential for the Asian shore crab to spread farther north, along the coasts of Northern England and Norway.

According to AWI biologist Dr Gabriela Torres and Dr Luis Giménez, a fellow biologist at the AWI and first author: “Our study confirms that, when it comes to predicting the climate-related spread of marine fauna, we need to especially focus on the early stages of development, as they are critical for the settlement on new habitats and the establishment of new permanent populations.” Prof Steffen Harzsch from the University of Greifswald’s Zoological Institute and Museum adds: “The Research Training Group RESPONSE offers us an outstanding platform for scientifically investigating various aspects of climate change, through interdisciplinary collaborations that reach far beyond Greifswald.” 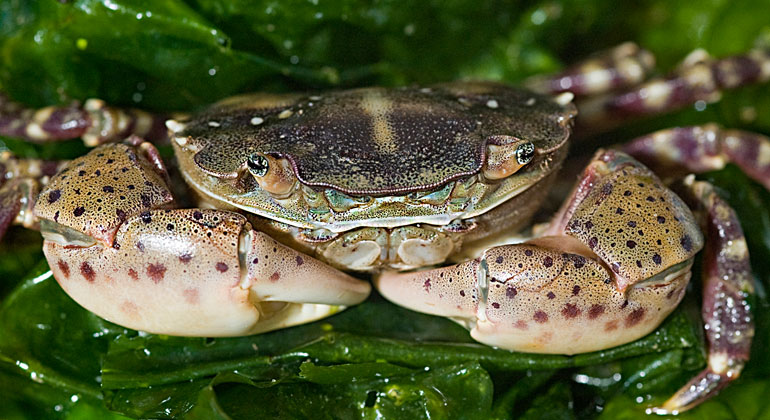