When the soil warms up, it releases more carbon dioxide (CO2) – an effect that further fuels climate change. Until now, it had been assumed that the reason for this was mainly due to the presence of small soil animals and microorganisms that would eat and breathe more in warmer temperatures.

However, a new study in Nature Climate Change has shown that this is not the case. Quite the contrary: If warmth is accompanied by drought, the soil animals eat even less. In order to improve the predictive power of climate models, it is now crucial to understand the biological processes in the soil better, say the scientists.

The fact that the world’s climate is changing is mainly due to the burning of fossil fuel. As a consequence, large quantities of carbon dioxide (CO2) are released into the Earth’s atmosphere. However, additionally, climate change is also being intensified on its own, because global warming is also causing the natural carbon cycle to change. Although on Earth, carbon is constantly converted from solid compounds into gaseous CO2 and vice versa, warmer temperatures can further enhance carbon losses in form of CO2 from the soil. As a result, more CO2 is introduced into the Earth’s atmosphere: a positive feedback.

Scientists had previously assumed that this effect was mainly due to the presence of small animals and microorganisms in the soil, which feed on dead organic matter (for example, fallen leaves). Because when they ‘burn’ their food, CO2 is released (‘respiration’). It was assumed that at warmer temperatures, insects and worms with decomposing roles would eat more, and the dead organic matter in the soil would be decomposed at faster rates. After all, these animals are poikilotherms whose body temperature and activity depend on the environment. Bacteria and unicellular fungi in the soil should also be more active at warmer temperatures, based on the current understanding. But now a new study questions this assumption. A team of researchers led by the German Centre for Integrative Biodiversity Research (iDiv) and Leipzig University carried out an experiment to simulate the warming of the soil in the forest and found out surprisingly: The warmer temperatures have no influence on the feeding activity of the soil animals. When the researchers simulated a second effect of climate change in addition to warming, namely drought, the results were even the opposite as expected: The soil animals ate less, and also the microorganisms living in the soil showed a decline in respiration – an indication that they also consumed less food.

Dr Madhav P. Thakur, first author of the study, explains why these results are of great relevance: “The feedback effect of climate warming via the greater release of CO2 from the soil is a crucial assumption in models predicting our future climate. Therefore, it is important to know what it causing this effect. Our results indicate that it may not be the soil animals, on the contrary: Their role may actually be the opposite of what we expected, at least when warming and drought occur together”. According to Professor Nico Eisenhauer, the senior author of the study: “It is most likely that instead of soil animals and microorganisms, the plants are responsible for the feedback effect because they also breathe with their roots. In order to improve the validity of climate models, we now urgently need to understand the biological processes in the soil better.” After all, soil is the major reservoir of carbon on earth, the scientist says.

The study was conducted as part of a long-term climate change experiment in Minnesota, USA. In the ‘B4WarmED’ (Boreal Forest Warming at an Ecotone in Danger) experiment, scientists are heating various plots of boreal forest land artificially by 3.4°C. In addition, they also reduce rainfall by 40% in some places by setting up tents in rainy weather. The scientists measured how much the soil animals ate using ‘bait lamina strips’: small sticks with holes in which the researchers filled substrate that resembled the organic matter in the soil. These sticks were stuck deep into the ground. Every two weeks the scientists checked how much of the substrate was eaten. The researchers carried out more than 40 such measurements over a period of four years. It is the first study of this scale to investigate the effects of global warming and drought on decomposer soil animals. In addition, the researchers checked the respiration of soil microorganisms by excluding plant roots with a metal ring in small soil areas and then measuring how much CO2 was released from the soil with a gas analyser. 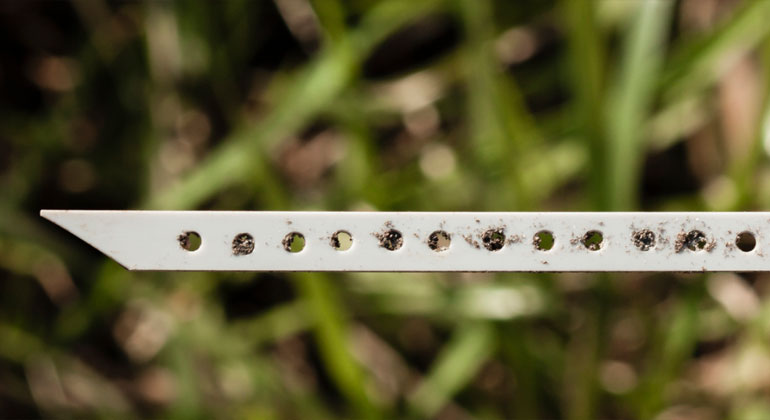 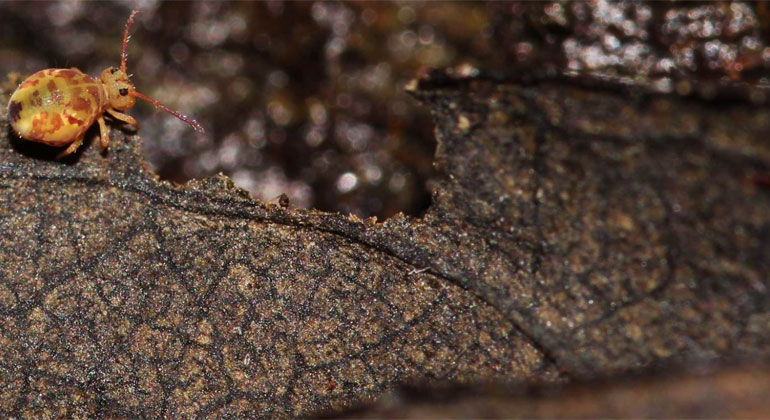