The loss of arctic permafrost deposits by coastal erosion could amplify climate warming via the greenhouse effect. A study using sediment samples from the Sea of Okhotsk on the eastern coast of Russia led by AWI researchers revealed that the loss of Arctic permafrost at the end of the last glacial period led to repeated sudden increases in the carbon dioxide concentration in the atmosphere.

Today, the exact magnitude of the future increase in greenhouse gas concentrations remains unknown. This is partly due to the fact that carbon dioxide is not only produced by humans burning gas, coal and oil; it can also find its way into the atmosphere as a result of natural environmental processes. The positive feedback between warming and the release of ever increasing amounts of carbon dioxide from natural sources is a particular threat. In order to enable a better assessment of whether, and how, such developments are possible, climate researchers study records from the past to find evidence of these events.

Researchers from the Alfred Wegener Institute Helmholtz Centre for Polar and Marine Research (AWI) together with colleagues from Copenhagen and Zurich have now found evidence of this phenomenon for the Arctic permafrost regions. As the authors report in the journal Nature Communications, through their investigations along the coast of the Sea of Okhotsk in eastern Russia, they were able to show that several thousand years ago large quantities of carbon dioxide were released from Arctic permafrost – due to a rapid rise of sea level. Permafrost is ground that remains frozen year round down to depths of up to several hundred metres, some since the last glacial period 20,000 years ago or even longer. Like a giant freezer, permafrost soils preserve huge quantities of dead biomass, mainly plant remains. When the permafrost thaws, bacteria start degrading the ancient biomass, and their metabolisms release the greenhouses gases carbon dioxide and methane.

We now know that about 11,500, 14,600 and 16,500 years ago, significant and sudden rises in the carbon dioxide level in the atmosphere occurred, but the reasons for these three rapid fluctuations remain poorly understood. In order to investigate the causes, a group of researchers led by AWI geologists Dr Maria Winterfeld and Prof Dr Gesine Mollenhauer set off for the Sea of Okhotsk. “Originally we assumed that at the time, the vast Amur River carried tremendous quantities of plant material from the hinterland, which microorganisms in the water then broke down into carbon dioxide. So we collected sediment samples from the sea floor, which we then analysed.” The findings were surprising: deep in the sediment, the researchers found evidence of plant remains that had been deposited on the sea floor. These were several thousand years older than the surrounding deposits, which made it clear that they must have originated in extremely old permafrost that for some reason had suddenly thawed. Particularly large amounts of these plant remains were washed into the sea 11,500, 14,600 and 16,500 years ago. But the Amur’s discharge rate was not significantly higher at those times.

Gesine Mollenhauer and her team found the solution to this puzzle when they looked at the changes in sea level since the last glacial period. About 11,500 and 14,600 years ago, particularly intense melting of the ice-sheets led to what are known as meltwater pulses – and each time the sea level rose by up to 20 metres within a few centuries. “We assume that this resulted in severe erosion of the permafrost coast in the Sea of Okhotsk and the North Pacific – a phenomenon that we can observe in the Arctic today.” This allowed large amounts of several-thousand-year-old plant remains to enter the ocean, some of which were broken down into carbon dioxide by bacteria or deposited in the ocean floor.

To determine whether such permafrost erosion could indeed have been a key factor in increases in the global carbon dioxide concentration, AWI colleague Dr Peter Köhler used a computer model to simulate the global carbon cycle. By estimating the area of permafrost lost to the sea at the time, he obtained data on the likely amount of carbon dioxide released. The results are eye opening: 11,500 and 14,600 years ago, erosion of Arctic permafrost probably contributed to about 50 percent of the carbon dioxide increase, and 16,500 years ago to about a quarter.

The AWI team has thus revealed a process that could become reality in the future. Today the Arctic’s permafrost coast is eroding severely because the region is warming rapidly – in some places the coast is receding at a rate of 20 metres per year. As Gesine Mollenhauer explains: “Our findings show that this coastal erosion is an important process, but to date it has not been sufficiently considered in climate models. Such effects need to be included in future models.” 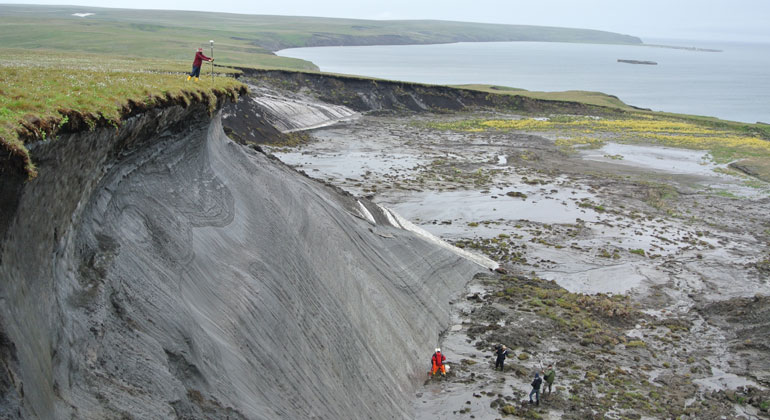