Concerted efforts around the world are now being made to limit global warming to less than 1.5 to 2 degrees Celsius. But how far are we from passing these thresholds?

Climate models have been used to estimate this emission headroom, but a new study by Thorsten Mauritsen from the Max Planck Institute for Meteorology (MPI-M) and Robert Pincus from University of Colorado published in Nature Climate Change instead uses observations of global warming at the Earth’s surface and in the oceans to infer the future warming to which the planet is already committed by past emissions, and find that the window of opportunity on the 1.5 degrees target is closing.

The Earth is about 0.8 degrees Celsius warmer today than at the dawn of industrialization. This warming is due mainly to human emissions of the greenhouse gas carbon dioxide through burning of fossil coal, oil and gas. Because the oceans have such an enormous capacity to absorb heat they are out of balance with even current concentrations of CO2 and balance would be reached only after hundreds or thousands of years. Because CO2 is removed from the atmosphere at the same long time scales, human influence on Earth’s climate will continue long after emissions from fossil fuel burning eventually stop. The influence of past emissions on future temperature is often called “committed warming.”

Carbon dioxide is not the only influence on future temperature changes. Some amount of warming is masked by polluting aerosol particles also associated with fossil fuel burning. These aerosols reflect sunlight back to space, cooling the planet’s climate. But in contrast to CO2 their lifetime in the atmosphere is very short, so that a short burst of rapid warming is expected when emissions stop. Working in the opposite direction are various short-lived greenhouse gas pollutants such as methane, nitrogen oxides and carbon monoxide. All these gases contribute to warming but have short lifetimes — less than a decade – leading to a somewhat cooler future after emissions are stopped.

After considering these effects the authors estimate that warming at the end of the century would probably reach 1.3 degrees Celsius (0.9-2.3) in the hypothetical case that all fossil fuel emissions would suddenly stop in year 2017. This leaves fairly little headroom until the 1.5 degrees target is surpassed: about 15 years at the current rate of emissions until the risk of exceeding the 1.5 degrees target reaches 50 percent.

Nature might help a bit, though, by removing some of the CO2 from the atmosphere and upper ocean and burying it in the deeper oceans. It is still too early to estimate how strong the removal is using observations, but climate models suggest the effect is important. By accounting for such an effect in their study Mauritsen and Pincus find that committed warming is 1.1 degrees Celsius (0.7-1.8) at the end of the century.

By considering the error bars in each factor the authors are able to put error bars on their estimates. The error bars imply that for example, there is some risk that the 1.5 degrees target is already impractical. This uncertainty will decrease quickly in the coming years as observations improve and the warming signal becomes stronger. 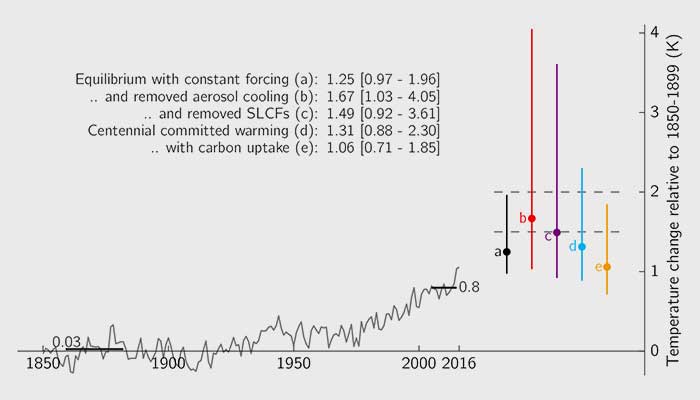