The world’s second-largest ice sheet, and the single largest contributor to global sea level rise, is potentially becoming unstable because of fractures developing in response to faster ice flow and more meltwater forming on its surface.

Using custom-built drones strong enough to withstand the extreme Arctic conditions, researchers led by the University of Cambridge made the first drone-based observations of how fractures form under meltwater lakes on the Greenland Ice Sheet. These fractures cause catastrophic lake drainages, in which huge quantities of surface water are transferred to the sensitive environment beneath the ice.

The study, published in the Proceedings of the National Academy of Sciences, shows how the water is transferred and how the ice sheet responds. The researchers found that inflowing meltwater expanded the lake and drainage began when the edge of the lake intersected a fracture, which formed one year earlier.

Each summer, thousands of lakes form on the Greenland Ice Sheet as the weather warms. Many of these lakes can drain in just a few hours, creating caverns known as moulins, through which water descends to the bottom of the ice sheet.

These cavities typically stay open for the remainder of the melt season, as meltwater from streams and rivers on the surface descends beneath the ice. Given that the ice sheet is typically a kilometre thick or more, the flow of water into the moulins may well be the world’s largest waterfalls.

While conducting the research from a camp on Store Glacier in northwest Greenland, the team witnessed how this fracture became active and how it propagated 500 metres further into the lake, causing the lake to drain rapidly. In multiple drone flights, the team was able to document the flow of water into the fracture and the water’s subsequent pathway under the ice.

In a detailed reconstruction of the event, which is rarely observed directly, the team, which also included researchers from Aberystwyth and Lancaster Universities, showed how the meltwater causes the formation of new fractures, as well as the expansion of dormant fractures.

In just five hours, five million cubic metres of water – the equivalent of 2,000 Olympic-sized swimming pools – drained to the bottom of the ice sheet via the fracture, causing a new cavity to form and reducing the lake to a third of its original volume. This caused the ice flow to accelerate from a speed of two metres per day to more than five metres per day as surface water was transferred to the bed, which in turn lifted the ice sheet by half a metre.

The drone footage supports computer models used by the same team of researchers to show that drainage of melt lakes in Greenland can occur in a chain reaction. The new study provides an insight as to how these chain reactions might be triggered, via lakes that can drain through existing fractures.

“It’s possible we’ve under-estimated the effects of these glaciers on the overall instability of the Greenland Ice Sheet,” said first author Tom Chudley, a PhD student at the Scott Polar Research Institute and the team’s drone pilot. “It’s a rare thing to actually observe these fast-draining lakes – we were lucky to be in the right place at the right time.”

“These glaciers are already moving quite fast, so the effect of the lakes may not appear to be as dramatic as it is on slower-moving glaciers elsewhere, but the overall effect is in fact very significant,” said Dr Poul Christoffersen, who led the expedition. “To date, most observations are provided by satellites. These allow us to see what’s happening over the whole ice sheet, but drone-based observations give a lot more nuance to our understanding of these lake drainages. We can also observe the formation and re-opening of fractures, which isn’t possible from satellites.”

The drones, which were built at the Scott Polar Research Institute, were fitted with autopilot and navigated autonomously along pre-programmed flight paths in missions that lasted up to an hour each. By also fitting on-board GPS, the team was able to accurately geo-locate and stitch together hundreds of photos taken during each survey. The photos were used to create detailed 3D reconstructions of the ice sheet surface.

The findings show that fast-flowing glaciers in Greenland are subject to significant forcing by surface meltwater. They also show that changes in ice flow occur on much shorter timescales than considered possible so far.

Christoffersen leads the EU-funded RESPONDER project, of which this study was a part. The RESPONDER team are using the drone footage to identify ‘hotspots’ where the ice sheet behaves sensitively.

Using drilling equipment, the team is now exploring how the water is accommodated in the basal drainage system and how the ice sheet may change over the coming decades as the climate continues to warm.

The difference between snow accumulation and loss of ice in Greenland ice sheet currently amounts to one billion tonnes of ice being lost every day. This net loss of ice is growing, making the Greenland Ice Sheet the single largest contributor to global sea level rise. 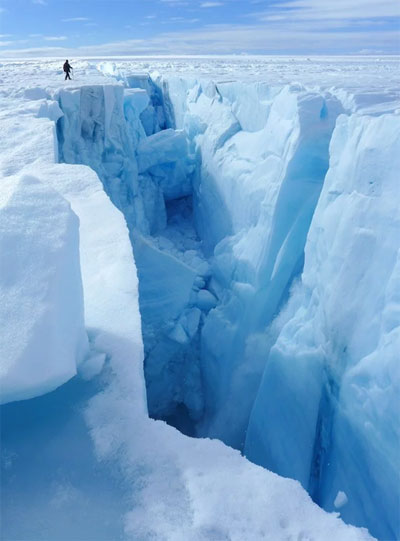 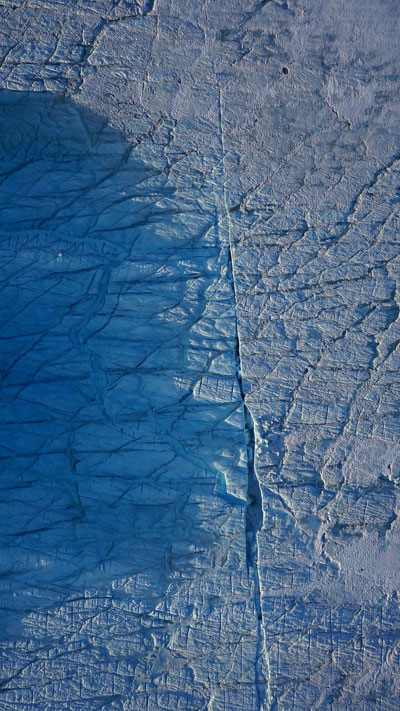