Therefore less oxygen is dissolved in surface waters and less oxygen is transported into the deep sea. This reduction of oceanic oxygen supply has major consequences for the organisms in the ocean. In the international journal Nature, oceanographers of GEOMAR Helmholtz Centre for Ocean Research Kiel have now published the most comprehensive analysis on oxygen loss in the world’s oceans and their cause so far.

Oxygen is an essential necessity of life on land. The same applies for almost all organisms in the ocean. However, the oxygen supply in the oceans is threatened by global warming in two ways: Warmer surface waters take up less oxygen than colder waters. In addition, warmer water stabilizes the stratification of the ocean. This weakens the circulation connecting the surface with the deep ocean and less oxygen is transported into the deep sea. Therefore, many models predict a decrease in global oceanic oxygen inventory of the oceans due to global warming. The first global evaluation of millions of oxygen measurements seems to confirm this trend and points to first impacts of global change.

In the renowned scientific journal Nature the oceanographers Dr. Sunke Schmidtko, Dr. Lothar Stramma and Prof. Dr. Martin Visbeck from GEOMAR Helmholtz Centre for Ocean Research Kiel just published the most comprehensive study on global oxygen content in the world’s oceans so far. It demonstrates that the ocean’s oxygen content has decreased by more than two percent over the last 50 years. “Since large fishes in particular avoid or do not survive in areas with low oxygen content, these changes can have far-reaching biological consequences,” says Dr. Schmidtko, the lead-author of the study.

The researchers used all historic oxygen data available around the world for their work, supplemented it with current measurements and refined the interpolation procedures to more accurately reconstruct the development of the oxygen budget over the past 50 years. In some areas previous research had already shown a decrease in oxygen. “To quantify trends for the entire ocean, however, was more difficult since oxygen data from remote regions and the deep ocean is sparse,” explains Dr. Schmidtko, “we were able to document the oxygen distribution and its changes for the entire ocean for the first time. These numbers are an essential prerequisite for improving forecasts for the ocean of the future.”

The study also shows that, with the exception of a few regions, the oxygen content decreased throughout the entire ocean during the period investigated. The greatest loss was found in the North Pacific. “While the slight decrease of oxygen in the atmosphere is currently considered non-critical, the oxygen losses in the ocean can have far-reaching consequences because of the uneven distribution. For fisheries and coastal economies this process may have detrimental consequences,” emphasizes the co-author Dr. Lothar Stramma.

“However, with measurements alone, we cannot explain all the causes,” adds Professor Martin Visbeck, “natural processes occurring on time scales of a few decades may also have contributed to the observed decrease.” However, the results of the research are consistent with most model calculations that predict a further decrease in oxygen in the oceans due to higher atmospheric carbon dioxide concentrations and consequently higher global temperatures.

The new study is an important result for the ongoing work in the Collaborative Research Center (SFB) 754 funded by the German Research Foundation (DFG) at the Kiel University and GEOMAR. The SFB 754’s aim is to better understand the interaction between climate and biogeochemistry of the tropical ocean. “From the beginning of March onwards, four expeditions aboard the German research vessel METEOR will investigate the tropical oxygen minimum zone in the eastern Pacific off Peru. We hope to obtain further data on regional development which will also help us to better understand the global trends,” emphasizes Dr. Stramma, the expedition coordinator for the SFB. 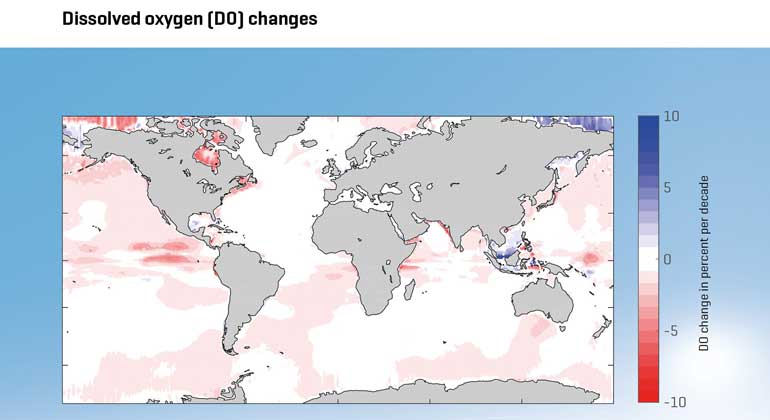 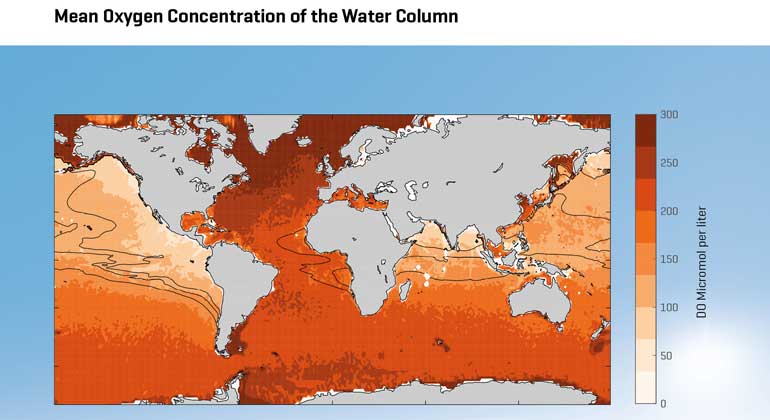