All around the Antarctic coastline there are ice sheet instabilities waiting to be triggered. If this happens ice flows inexorably into the ocean and raises sea levels worldwide.

The one region where instability likely has already been initiated by a warming of the ocean is probably the region which collapses faster than any other, find scientists from the Potsdam Institute for Climate Impact Research (PIK). Even though the rapid ice loss takes decades to unfold and centuries to complete, the speed of ice loss from Antarctica is already a major driver of global sea level rise. It will affect hundreds of millions of people living near the world’s coastlines, from Miami to Shanghai.

“We often think that regarding Antarctic ice loss, the worst is yet to come – although that is true it seems that this ‘worst’ has already been set in motion,” says lead-author Anders Levermann from PIK and Columbia University’s Lamont-Doherty Earth Observatory in New York. “Pine Island and Thwaites Glacier in the West of the Antarctic continent are increasingly losing ice for three decades already, and computer simulations support that we see a marine ice sheet instability happening here potentially leading to additional global sea-level rise of more than 3 meters. Our calculations now show that this instability is unfolding much more rapidly than similar processes would do in other parts of Antarctica that store similarly large ice masses. The good news is that the ice masses in the East of the continent might be slower, at least if we rapidly limit further global warming. The bad news is that the worst of sea level rise might be already under way.”

“The first tipping element that we see tipping”

It is still unclear whether the West Antarctic ice sheet instability is triggered by human activity. Surface temperatures on most parts of the ice continent are constantly below the freezing point, yet greenhouse gas emissions from burning fossil fuels will lead not just to a warmer atmosphere but also warmer ocean currents which break through to Antarctica and start underwater melting. If the grounding line – which separates the ice still grounded on land from the ice that already started to float – retreats, and if it does so in an area where there’s an inland downward bed slope, this can lead to self-accelerating ice loss. This is why parts of Antarctica are considered to be so-called tipping elements of the Earth system. “The first tipping element that we see tipping happens to be the fastest – at least the fastest of Antarctica,” says Levermann.

“Our results have to be viewed in light of the uncertainties involved. We did not include the effect of buttressing – confined floating ice shelves or massive pointy rocks on the seabed can slow down the flow of ice from the land into the sea. Also, the data we use for our calculations from this wildest of all continents is by nature not perfect,” says co-author Johannes Feldmann from PIK.

Applying pure physics, the scaling laws, to the real world

However, the scientists used a well-known principle in a novel way. “Applying the concept of similitude to the governing equations for fast, shallow ice flow, we developed so-called scaling laws in a previous study,” Feldmann says. “These laws assure similar flow patterns of the ice under variation of its geometric dimensions, velocity, friction, snowfall and viscosity. This is pure physics. We now applied this theory to the real world, to different Antarctic outlet glaciers, considering their observed individual geometry and physical properties. This enables us to compare the speed of potential instabilities around Antarctica.”

“The results are fascinating,” adds Feldmann, “yet also a strong call for adaptation and resolute reduction of greenhouse gas emissions to curb global sea-level rise.” 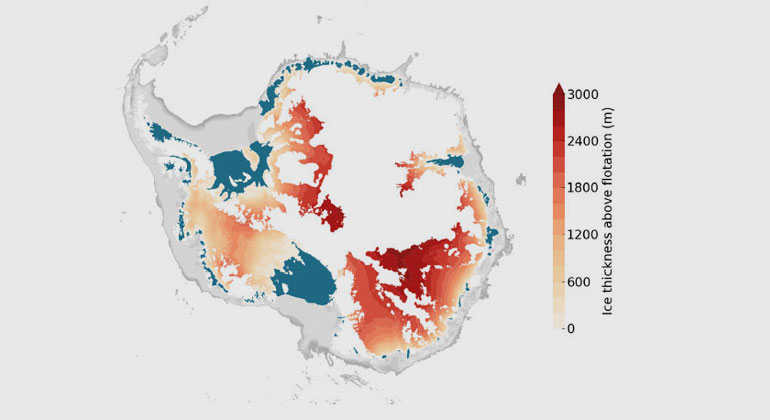