What we do to one part of our Earth system does not just add to what we do to other parts – transgressing one planetary boundary can amplify human impacts on another one. For the first time, an international team of scientists now quantified some of the planetary-scale interactions in the Earth system.

These biophysical interactions have in fact almost doubled direct human impacts on the nine planetary boundaries, from climate change to freshwater use. This insight can now be applied in policy design for safeguarding the livelihoods of generations to come.

“We found a dense network of interactions between the planetary boundaries,” says Johan Rockström, Director of the Potsdam Institute for Climate Impact Research and co-author of the study. Two core boundaries – climate change and biosphere integrity – contribute more than half the combined strengths of all the interactions in that network, the scientists find. “This highlights how careful we should be in destabilizing these two,” says Rockström. “The resulting cascades and feedbacks amplify human impacts on the Earth system and thereby shrink the safe operating space for our children and grand-children.”

Burning down tropical forests to expand agricultural lands for instance increases the amount of CO2 in the atmosphere. The additional greenhouse gases contribute to the global temperature increase, the harm done to the forests becomes harm to climate stability. The temperature increase can in turn further enhance stress on tropical forests, and for agriculture. The resulting amplification of effects is substantial even without taking tipping points into account: Beyond a certain threshold, the Amazon rainforest might show rapid, non-linear change. Yet such a tipping behavior would come on top of the amplification highlighted in the analysis now published.

The new study builds on the groundbreaking 2009 and 2015 studies on the planetary boundaries framework that identified the nine critical systems that regulate the state of the planet: climate change, biogeochemical flows (namely of nitrogen and phosphorus), land-system change, freshwater use, aerosol loading, ozone depletion, ocean acidification, loss of biosphere integrity including biodiversity, and introductions of novel entities such as toxic chemicals and plastics. The way of staying within planetary boundaries varies from one place to another on Earth, hence calculating them and the interactions between them on an aggregated level cannot directly be translated into policies. Yet it can provide some guidance. 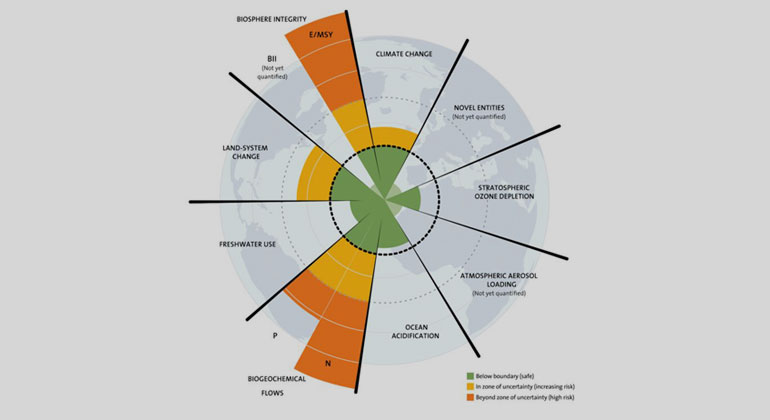