The Selectively Coated Ribbon (SCRTM) cell connector achieves an average gain of 1.9 W in conventional 60-cell solar modules. The connector can be used in industrial PV module manufacturing without system modification and at no extra cost. Fraunhofer ISE has successfully tested modules with the SCR connector in its accredited TestLab PV Modules. Heraeus and Ulbrich developed a process for the production of the efficient cell connector and presented the new product to the professional audience in September 2018 at the EU PVSEC in Brussels.

Crystalline silicon solar cells are usually interconnected by solder-coated copper connectors. These connectors are soldered to the front and backside metallization and conduct the electric current. While conventional cell connectors cannot harness incident light, the coated edges of the SCRTM connector reflect the light indirectly onto the cell surface, thereby providing increased performance. The effect works independently of the angle of incidence. Dr. Markus König, project manager of the publicly funded project for the development of SCRTM cell connector at Heraeus confirms: “Our project partner Fraunhofer ISE successfully supported the most important development steps of the new cell connector through targeted tests. Thanks to the close cooperation, we were able to develop the SCR connector in a short time and reliably validate the product.” Achim Kraft, team leader for connection technology at Fraunhofer ISE, is convinced: “Our tests have confirmed the performance gain and the reliability. As a drop-in replacement in industrial process lines, the new connector has the best chance of asserting itself on the module market.”

Calculation of performance gain by SmartCalc.CTM

The software tool SmartCalc.CTM of Fraunhofer ISE enabled the exact calculation of the performance gain by the SCRTM connectors in advance. The CTM (Cell-to-Module) analysis showed a power gain of 1.85 W by increasing the internal reflection. Module measurements on a preliminary series showed an average power increase of 1.9 W, thus confirming the results of the CTM calculation.

Modules produced with the SCRTM connector showed high reliability in load tests according to IEC 61215 test standard. In extended tests carried out at the TestLab PV Modules at Fraunhofer ISE, the cell connectors were examined under specific loads such as temperature changes, increased UV radiation and moisture storage. The combination of UV exposure and moisture is realized in a special climate chamber and goes beyond the usual standard tests of the IEC standard. In comparison to the common cell connector with plain solder coating, there were no restrictions with regard to reliability.

The development work is part of the “CONNECT Combined Metallization and Connection Technology for Efficient PV Modules” project and is funded by the Federal Ministry for Economic Affairs and Energy (BMWi) (Grant number: 0324052B). 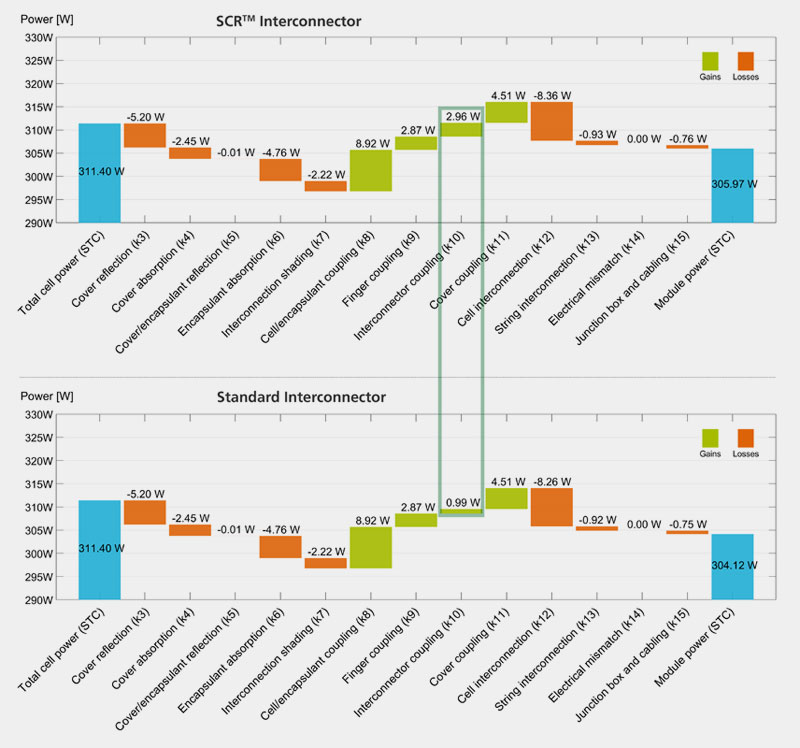