The study highlights a process with alerting consequences for modern ice sheets: continuous warming of the ocean can result in a massive loss of polar ice mass, and consequently to rapid sea level rise.

Looking at a world map it appears that the different ocean basins of our globe are constricted by the masses of the continents. In reality, the ocean basins are interconnected by large-scale current systems and like a global conveyor belt, the currents transport water around the globe, at varying depths. The resultant distribution of warm and cold-water masses is critical for the climatic conditions in the various regions of Earth. Scientists at the Alfred Wegener Institute, Helmholtz Centre for Polar and Marine Research (AWI) have now documented an example, how a change in currents in one ocean basin can trigger massive and unexpected changes in a distant basin, even on the other side of the planet.

The Bremerhaven-based researchers report in the journal Nature that during the last glacial period a massive inflow of freshwater into the polar North Atlantic set off a chain of events in the ocean and the atmosphere, which resulted intensive glacier melting in the North Pacific, thousands of kilometres away. The source of the freshwater: melting ice sheets, which covered much of the land masses surrounding the North Atlantic during the glacial. At the end of the chain of events, warm water penetrated the Pacific coastal area of the North American continent, which was also covered by an ice sheet. As a result, parts of the sheet disintegrated and were released into the Pacific as  large-scale flotilla of icebergs. Considering that the modern ocean is warming continuously as a result of global warming, such finding is alerting for the AWI scientists. Comparable to the process observed in the eastern North Pacific during the last glacial, the ongoing ocean warming may disintegrate Antarctic ice, which subsequently would result in a significant sea level rise.

Together with a team of scientists, AWI geoscientist Edith Maier disclosed the involved complex processes stepwise. First indications were gathered from sediment sampling during an expedition with the German research ship “Sonne” 600 kilometres off the coast of Alaska. The recovered glacial sediment included layers of up to cobble-sized stones, which originated in the distant continental land. The only feasible explanation: the stones must have been transported incorporated to icebergs far away into the open North Pacific Ocean during times the North American coast was covered by an ice sheet. Confirmation came from the dating of the layers, which reveals that the stony layers have been deposited around 16,000 years and 38,500 years ago, thus during the last glacial period. “Accordingly, we assume there were two major melting events in the North Pacific realm,” says Edith Maier.

To test this thesis, the team employed an innovative analytical technique pioneered at the AWI. The method uses diatoms to determine how intensively the salinity of ocean surface waters has declined, e.g. due to meltwater deposition. By performing an oxygen isotope analysis on the remains of the siliceous hardparts of diatoms preserved in the sediment record, the researchers were able to identify at what times the surface salinity was most intensively affected by melting ice. “In fact, our analyses showed that there were major inflows of freshwater into the area south of Alaska roughly 16,000 and 38,500 years ago,” confirms Edith Maier.

Previous reconstructions of glacial conditions have documented that meltwater inflows have caused major drops in surface salinity in the North Atlantic, a feature which inspired Edith Maier to investigate whether the meltwater events in the North Atlantic and the North Pacific were linked via the global water circulation. Today, warm surface water is transported from the Pacific to the Indian Ocean, then flows around the southern tip of Africa towards the Caribbean realm and then spreads into the North Atlantic via a current called “Gulf Stream”. The driver of this global flow is the generation of cold and salty water in the polar North Atlantic. This water, produced during ice formation, is denser than warm water and therefore sinks into the deep ocean. As a result, the surface warm water is pumped to the North. But 16,000 and 38,500 years ago, the global “pumping system” was seriously disrupted by the decreased salinity of the North Atlantic. Consequently, only little warm water flowed out of the Pacific, causing the tropical Pacific to get warmer. In turn, more warm water reached the western coasts of Canada and Alaska. The inflow of warmer water destabilized the ice sheet covering the coastal areas which resulted in a discharge of the continental ice into the ocean and a drop in surface salinity.

To validate this scenario, Edith Maier asked the AWI’s climate modellers, led by Gerrit Lohmann, whether such a complex, global chain of events could be simulated using computer models. The results were unequivocal: if the oxygen isotopes are taken into account, the models clearly show that the phenomenon occurs. The model results also show that meltwater pulses in the Atlantic caused the changes in the Pacific – and not the other way round. “Our findings are also relevant for the future, because they highlight that climate effects on one side of the Earth can significantly impact regions on the opposite side,” summarises Edith Maier. “The AWI is currently exploring how similar phenomena involving the inflow of warmer water are now affecting the stability of the Antarctic ice sheet. There is increasing evidence suggesting that further ocean warming will jeopardise both the stability and volume of the Antarctic ice.” 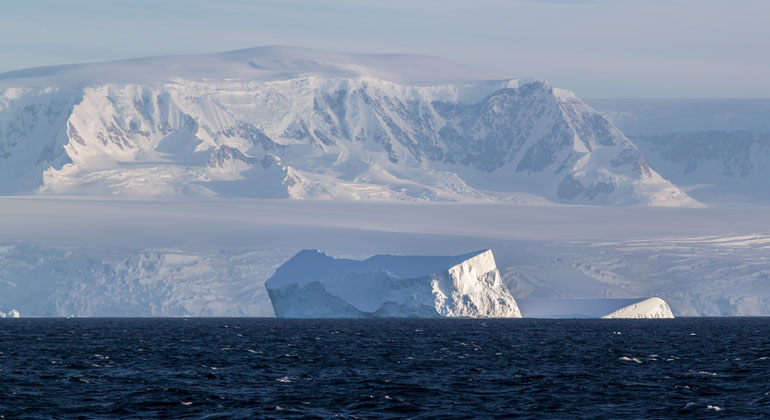