The new study by the Energy Watch Group and LUT University is the first ofits kind to outline a 1.5°C scenario with a cost-effective, cross-sectoral, technology-rich global 100%renewable energy system that does not build on negative CO2 emission technologies. The scientificmodelling study simulates a total global energy transition in the electricity, heat, transport anddesalination sectors by 2050. It is based on four and a half years of research and analysis of datacollection, as well as technical and financial modelling by 14 scientists. This proves that the transitionto 100% renewable energy is economically competitive with the current fossil and nuclear-basedsystem, and could reduce greenhouse gas emissions in the energy system to zero even before 2050.

“The report confirms that a transition to 100% renewables is possible across all sectors, and is nolonger more expensive than the current energy system,” said Hans-Josef Fell, former Member of theGerman Parliament and President of the Energy Watch Group, in advance of the publication. “Itshows that the whole world can make the transition to a zero emission energy system. That is why allpolitical powers around the world can and should do much more to protect our climate than theycurrently envision.” Thanks to the developed model and the extensive existing database, EWG andLUT can now also develop national roadmaps for the transition to 100% renewables, tailoredprecisely for the individual countries’ respective context, Fell added.

“The study’s results show that all countries can and should accelerate the current Paris ClimateAgreement targets,” said Dr Christian Breyer, Professor for Solar Economy at the Finnish LUTUniversity. “A transition to 100% clean, renewable energies is highly realistic – even today, with thetechnologies currently available.

Prof. Dr Claudia Kemfert, Head of the Department of Energy, Transport and the Environment at theGerman Institute for Economic Research (DIW), highlighted the economic viability of renewableenergies: “The study is an impressive demonstration that a transition to renewable energy sourcesworldwide is not only feasible, but also makes economic sense.” David Wortmann, initiator of theEco Innovation Alliance and founding member of Entrepreneurs For Future also called on policymakersto put in place innovation-friendly frameworks and emphasised that “for us, an economicallyprofitable energy transition has long since ceased to be a myth”. Franziska Wessel from Fridays ForFuture also called on policy-makers to take immediate action: “This study shows what is possible ifour politicians are willing to act. We – Fridays For Future – call for a completion of the transition to100% renewables by 2035.”

The study concludes with political recommendations for a rapid integration of renewable energy andzero greenhouse gas emission technologies. Among the most important measures suggested by thereport are promoting sector coupling, private investments (which should ideally be incentivised withfixed feed-in tariffs), tax breaks and legal privileges with simultaneous discontinuation of subsidiesfor coal and fossil fuels. According to the report, the transition to a global energy system based on100% renewables can be achieved before 2050 if a strong policy framework is implemented.

Some key findings of the study: 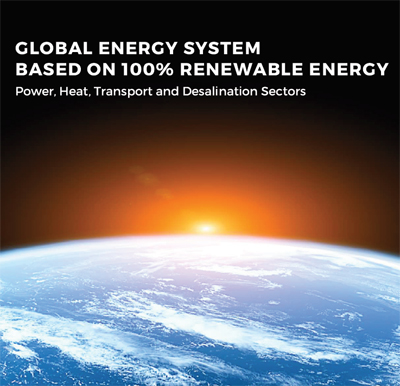