Thin mulch films made of polyethylene are used in agriculture in numerous countries, where they cause extensive soil contamination.

Researchers at ETH Zurich and Eawag have now identified an alternative: films made of the polymer PBAT biodegrade in soils.

Our world is drowning in a flood of plastic. Eight million tons of plastic end up in the oceans every year. Agricultural soils are also threatened by plastic pollution. Farmers around the world apply enormous amounts of polyethylene (PE) mulch films onto soils to combat weeds, increase soil temperature and keep the soil moist, thereby increasing overall crop yields.

After harvest, it often is impossible for farmers to re-collect the entire films, particularly when films are only a few micrometers thin. Film debris then makes its way into the soil and accumulates in the soil over time, because PE does not biodegrade. Film residues in soils decrease soil fertility, interfere with water transport and diminish crop growth.

Researchers at ETH Zurich and the Swiss Federal Institute of Aquatic Science and Technology (Eawag) have now shown in an interdisciplinary study that there is reason to be hopeful. In their recent study, they demonstrate that soil microbes degrade films composed of the alternative polymer poly(butylene adipate-co-terephthalate) (PBAT). Their work has just been published in the journal Science Advances.

In the research project coordinated by Michael Sander, Kristopher McNeill and Hans-Peter Kohler, former ETH doctoral student Michael Zumstein succeeded in demonstrating that soil microorganisms metabolically utilised the carbon in the PBAT polymer both for energy production and also to build up microbial biomass.

“This research directly demonstrates, for the first time, that soil microorganisms mineralise PBAT films in soils and transfer carbon from the polymer into their biomass,” says Michael Sander, Senior Scientist in the Environmental Chemistry Group in the Department of Environmental Systems Science at ETH Zurich.

Like PE, PBAT is a petroleum-based polymer that is used to make various products, including mulch films. Because PBAT was already classified as biodegradable in compost, the ETH and Eawag researchers aimed at assessing whether PBAT also biodegrades in agricultural soils. By comparison, PE does not biodegrade in compost or in soil.

Labelling of polymer with carbon-13

In their experiments, the researchers used PBAT material that was custom-synthesised from monomers to contain a defined amount of the stable carbon-13 isotope. This isotope label enabled the scientists to track the polymer-derived carbon along different biodegradation pathways in soil.

Upon biodegrading PBAT, the soil microorganisms liberated carbon-13 from the polymer.

Using isotope-sensitive analytical equipment, the researchers found that the carbon-13 from PBAT was not only converted into carbon dioxide (CO2) as a result of microbial respiration but also incorporated into the biomass of microorganisms colonizing the polymer surface.

“The beauty of our study is that we used stable isotopes to precisely track PBAT-derived carbon along different biodegradation pathways of the polymer in the soil,” says Michael Zumstein.

The researchers are the first to successfully demonstrate – with high scientific rigor – that a plastic material is effectively biodegraded in soils.

Because not all materials that were labelled “biodegradable” in the past really fulfilled the necessary criteria. “By definition biodegradation demands that microbes metabolically use all carbon in the polymer chains for energy production and biomass formation – as we now demonstrated for PBAT,” says Hans-Peter Kohler, environmental microbiologist at Eawag.

The definition highlights that biodegradable plastics fundamentally differ from those that merely disintegrate into tiny plastic particles, for instance after exposure of the plastic to sunlight, but that do not mineralise. “Many plastic materials simply crumble into tiny fragments that persist in the environment as microplastics – even if this plastic is invisible to the naked eye,” Kohler says.

After six weeks of incubation, the scientists assessed the extent to which soil microorganisms had colonised the PBAT surfaces. They further quantified the amount of CO2 that was formed in the incubation bottles and how much of the carbon-13 isotope the CO2 contained. Finally, to directly demonstrate the incorporation of carbon from the polymer in the biomass of microorganisms on the polymer surfaces, they collaborated with researchers from the University of Vienna.

At this stage, the researchers cannot yet say with certainty over which timeframe PBAT degrades in soils in the natural environment given that they conducted their experiments in the lab, not in the field. Longer-term studies in different soils and under various conditions in the field are now needed to assess the biodegradation of PBAT films under real environmental conditions.

Too early for an all-clear

“Unfortunately, there is no reason to cheer as of yet: we’re still far from resolving the global environmental problem of plastic pollution,” says Sander, “but we’ve taken a very important first step in the direction of plastic biodegradability in soil.”

At the same time, he cautions against unrealistic expectations for biodegrading plastics in the environment: “As we have demonstrated, there is hope for our soils in the form of biodegradable polymers. The results from soils should, however, not be directly transferred to other natural environments. For instance, biodegradation of polymers in seawater might be considerably slower, because the conditions there are different and so are the microbial communities.”

The researchers anticipate that their study will be noticed by industry. “We’ve developed analysis techniques that open the door for industry to test the environmental impact of their plastic products,” says co-author Kristopher McNeill. “Thanks to our method, they can switch to using biodegradable materials in the production of thin mulch films instead of non-degradable PE,” he adds.

So far, only a few chemical companies have started to produce and market the more eco-friendly, but also more expensive, PBAT films. Among these is the German company BASF, which supported this study. “In comparison to the total volume of plastic that is brought into circulation, biodegradable mulch films play only a minor role. Yet, these products are an important starting point to decrease stress on agricultural soils and protect them from plastic accumulation in the long term,” Sander says.

An additional option to reduce the volume of plastic entering agricultural soils is to employ thicker mulch films, which are also used in Swiss agriculture. These films can be re-collected after use and then either reused or disposed of via waste incineration. 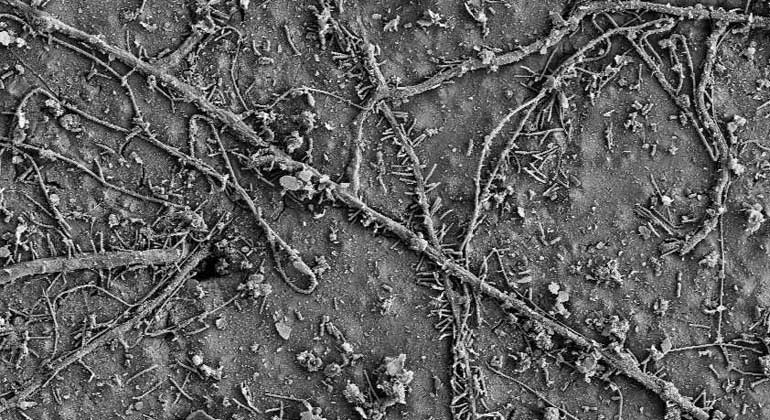 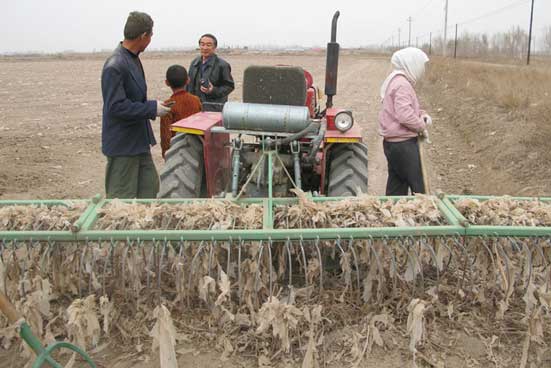