Finding sustainable petrol – how solar energy can be transformed into fuel.

The sun is a clean and inexhaustible source of energy, with the potential to provide a sustainable answer to all future energy supply demands. There’s just one outstanding problem: the sun doesn’t always shine and its energy is hard to store. For the first time, researchers at the Paul Scherrer Institute PSI and the ETH Zurich have unveiled a chemical process that uses the sun’s thermal energy to convert carbon dioxide and water directly into high-energy fuels: a procedure developed on the basis of a new material combination of cerium oxide and rhodium. This discovery marks a significant step towards the chemical storage of solar energy. The researchers published their findings in the research journal Energy and Environmental Science.

The sun’s energy is already being harnessed in various ways: whilst photovoltaic cells convert sun light into electricity, solar thermal installations use the vast thermal energy of the sun for purposes such as heating fluids to a high temperature. Solar thermal power plants involve the large-scale implementation of this second method: using thousands of mirrors, the sun light is focused on a boiler in which steam is produced in which steam is produced either directly or via a heat exchanger at temperatures exceeding 500°C. Turbines then convert thermal energy into electricity.

Researchers from the Paul Scherrer Institute PSI and ETH Zurich have collaborated to develop a ground-breaking alternative to this approach. The new procedure uses the sun’s thermal energy to convert carbon dioxide and water directly into synthetic fuel.

This allows solar energy to be stored in the form of chemical bond, explains Ivo Alxneit, chemist at the PSI’s Solar Technology Laboratory. It’s easier than storing electricity. The new approach is based on a similar principle to that used by solar power plants. Alxneit and his colleagues use heat in order to trigger certain chemical processes that only take place at very high temperatures above 1000°C. Advances in solar technology will soon enable such temperatures to be achieved using sun light.

Alxneit’s research is based on the principle of the thermo-chemical cycle, a term comprising both the cyclical process of chemical conversion and the heat energy required for it—referred to by experts as thermal energy. Ten years ago, researchers had already demonstrated the possibility of converting low-energy substances such as water and the waste product carbon dioxide into energy-rich materials such as hydrogen and carbon monoxide.

This works in the presence of certain materials such as cerium oxide, a combination of the metal cerium with oxygen. When subjected to very high temperatures above 1500°C, cerium oxide looses some oxygen atoms. At lower temperatures, this reduced material is keen to re-acquire oxygen atoms. If water and carbon dioxide molecules are directed across such an activated surface, they release oxygen atoms (chemical symbol: O). Water (H2O) is converted into hydrogen (H2), and carbon dioxide (CO2) turns into carbon monoxide (CO), whilst the cerium re-oxidizes itself in the process, establishing the preconditions for the cerium oxide cycle to begin all over again.

The hydrogen and carbon monoxide created in this process can be used to produce fuel: specifically, gaseous or fluid hydrocarbons such as methane, petrol and diesel. Such fuels may be used directly but can also be stored in tanks or fed into the natural gas grid.

One process instead of two

Up to now, this type of fuel production required a second, separate process: the so-called Fischer-Tropsch Synthesis, developed in 1925. The European research consortium SOLARJET recently proposed a combination of a thermo-chemical cycle and the Fischer-Tropsch procedure.

However, as Alxneit explains: although this basically solves the storage problem, considerable technical effort is necessary to carry out a Fischer-Tropsch Synthesis. In addition to a solar installation, a second industrial-scale technical plant is required.

By developing a material that allows the direct production of fuel within one process, the new approach developed by Ivo Alxneit and his colleagues dispenses with the Fischer-Tropsch procedure and hence also with the second step. This was accomplished by adding small amounts of rhodium to the cerium oxide. Rhodium is a catalyst that enables certain chemical reactions. It has been known for some time that rhodium permits reactions with hydrogen, carbon monoxide and carbon dioxide.

The catalyst is a pivotal research topic for the production of these solar fuels, says Alxneit. His PhD-candidate at the PSI Fangjian Lin emphasizes: it was a huge challenge to control the extreme conditions necessary for these chemical reactions and develop a catalyst material capable of withstanding an activation process at 1500 °C. During the cooling process, for example, the extremely small rhodium islands on the material surface must not be allowed to disappear or increase in size since they are essential to the anticipated catalytic process. The resulting fuels are either used or stored and the cyclical process begins again once the cerium oxide is re-activated.

Using various standard methods of structure and gas analysis, researchers working in laboratories at the PSI and the ETH in Zurich examined the cerium-rhodium compound, explored how well the reduction of the cerium oxide works and how successful methane production was. So far, our combinatory process only delivers small amounts of directly usable fuel, concludes Alxneit. But we have shown that our idea works and it’s taken us from the realms of science fiction to reality.

During their experiments, researchers kept things simple by using a high performance oven at the ETH in place of solar energy. In the test phase, the actual source of thermal energy is immaterial, explains Matthäus Rothensteiner, PhD-candidate at the PSI and the ETH Zurich whose area of responsibility included these tests.

Jeroen van Bokhoven, head of the PSI’s Laboratory for Catalysis and Sustainable Chemistry and Professor for Heterogeneous Catalysis at the ETH Zurich adds: These tests enabled us to gain valuable insights into the catalyst’s long-term stability. Our high performance oven allowed us to carry out 59 cycles in quick succession. Our material has comfortably survived its first endurance test. Having shown that their procedure is feasible in principle, researchers can now devote themselves to its optimization. 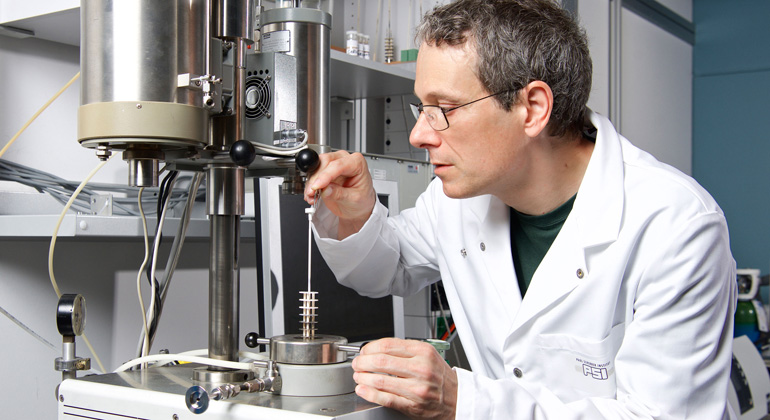