It may sound too good to be true, but TU Delft PhD-student Ming Ma (Delft University of Technology, The Netherlands) has found a way to produce alcohol out of thin air.

Or, to be more precise, he has found out how to effectively and precisely control the process of electroreduction of CO2 to produce a wide range of useful products, including alcohol. Being able to use CO2 as a resource this way may just be pivotal in tackling climate change. His PhD defence will take place on September 14th.

For mitigating atmospheric CO2 concentration, carbon capture and utilization (CCU) could be a feasible alternative strategy to carbon capture and sequestration (CCS). The electrochemical reduction of CO2 to fuels and value-added chemicals has attracted considerable attention as a promising solution. In this process, the captured CO2 is used as a resource and converted into carbon monoxide (CO), methane (CH4), ethylene (C2H4), and even liquid products such as formic acid (HCOOH), methanol (CH3OH) and ethanol (C2H5OH).
The high energy density hydrocarbons can be directly and conveniently utilized as fuels within the current energy infrastructure. In addition, the production of CO is very interesting since it can be used as feedstock in the Fischer–Tropsch process, a well-developed technology that has been widely used in industry to convert syngas (CO and hydrogen (H2)) into valuable chemicals such as methanol and synthetic fuels (such as diesel fuel). The figure below describes these three different processes and the way electroreduction of CO2 could potentially close the carbon cycle.

Precise tuning of the process

In his PhD thesis Ming Ma, working in the group of Dr. Wilson A. Smith, describes the processes that take place at the nanoscale when different metals are used in the electroreduction of CO2. For example, using copper nanowires in the electroreduction process leads to the production of hydrocarbons, while nanoporous silver can produce CO. Furthermore, as Ma discovered, the process can be very precisely regulated by changing the lengths of the nanowires, and the electric potential. By tuning these conditions, he is able to produce any carbon based product, or combinations in any ratio desired, thus producing the resources for the three follow up processes described above.
Using metal alloys in the process leads to even more interesting results. While platinum on its own produces hydrogen, and gold generates CO, an alloy of these two metals unexpectedly also produces formic acid (HCOOH) in relatively large quantities. Formic acid potentially has a very promising use in fuel cells.

Now that these processes have been charted, the next steps for the team at the Smith Lab for Solar Energy Conversion and Storage at TU Delft, http://www.smithsolarlab.com/ (Ma is the first PhD student to graduate from Wilson Smiths lab) is to look for ways to improve the selectivity of single products and to begin designing ways to scale up this process.
Smith just received an ERC Starting Grant to do just that: ‘improve our understanding of the complicated reaction mechanisms in order to gain better control of the CO2 electrocatalytic process’. 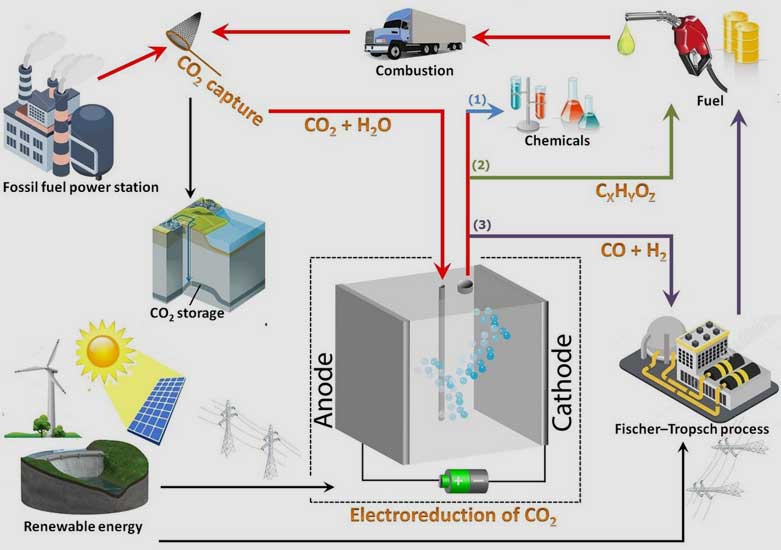