A new report presents, for the first time, the extent of urban sprawl for 32 countries in Europe, which has increased rapidly in recent decades.

A team of scientists, led by Prof. Felix Kienast of the Swiss Federal Research Institute WSL, concludes that this is a serious concern for a number of environmental and socio economic reasons. The results published can help to set new limits for urban sprawl.

The report provides, for the first time, an assessment of urban sprawl and its drivers for 2006-2009 in all EU and European Free Trade Association (EFTA) countries using a reliable indicator for urban sprawl. The latter was developed and tested by the Swiss Federal Research Institute WSL. Today, it is a routine indicator of the Swiss Landscape Observatory (LABES). Evaluated were variables like the percentage of built-up areas, urban permeation or the area of land used per inhabitant or workplace.

As many urban development and transport infrastructure projects are planned for the future, particularly in the Eastern European Union (EU) Member States, it is important to have consistent cartographic data on the degree of urban sprawl. Since this was lacking, the European Environment Agency (EEA) and the Swiss Federal Office for the Environment (FOEN) asked an international team led by Prof. Felix Kienast of the Swiss Federal Research Institute WSL to provide a seamless cover of urban sprawl in Europe and analyze its drivers. The task was technically challenging and required close collaboration between the Swiss specialist and experts from a Czech and a Canadian team led by Tomas Soukup and Prof. Jochen Jaeger respectively.

Despite various efforts to address the negative effects of urban sprawl, it has increased rapidly in Europe in recent decades. Thus, urban sprawl presents a major challenge with regard to sustainable land use, as the International Year of Soils 2015 highlighted.

Urban sprawl can be viewed as a typical example of an impact with a cumulative effect, just as viewed in landscape fragmentation. The changes usually occur in a gradual manner over long periods and are not perceived as dramatic. For this reason, urban sprawl is generally underestimated by policymakers.

Sprawl is a result not only of population growth but also of lifestyles that take up more space. Therefore, it is associated with a number of detrimental and long-lasting ecological, economic and social effects. Some of these relate to people’s desires, for example, to live in single-family homes with gardens. For example, urban sprawl contributes significantly to the loss of fertile farmland, to soil sealing and to the loss of ecological soil functions.

The increase in built-up areas reduces the size of wildlife habitats and increases landscape fragmentation and the spread of invasive species like Japanese knotweed (Fallopia japonica) or Tree of heaven (Ailanthus altissima). Urban sprawl leads to higher greenhouse gas emissions, higher infrastructure costs for transport, water and electrical power, the loss of open landscapes, and the degradation of various ecosystem services.

The results from this report show that there is an urgent need for action. The current levels of urban sprawl in many parts of Europe are already worrying and may well increase with expected urban development. The methods used in this report can be applied for urban sprawl analysis in urban and regional planning and for performance review.

This new EEA/Swiss Federal Office for the Environment (FOEN) report ‘Urban sprawl in Europe’ not only provides a welcome update to this topic but offers a refined approach for monitoring urban sprawl and a statistical analysis of drivers. There has also been a marked improvement in the quality of available data about built-up areas which makes a European-wide assessment now more accurate. 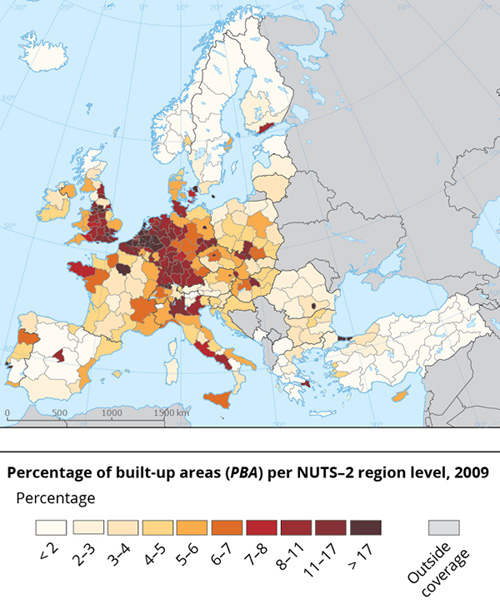 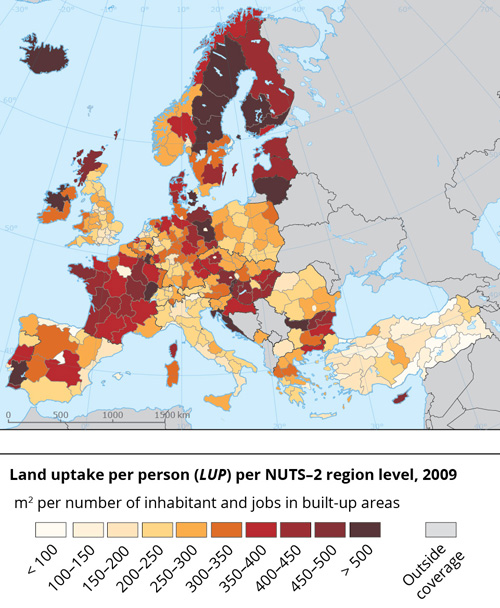