New findings about water characteristics in the Nordic Seas during interglacials published.

Due to rising temperatures and melting glaciers, the characteristics of the water masses in the Nordic Seas are expected to change. In order to get a better idea of the long-term effects of these changes, scientists compare current developments with similar times in the past. Two new studies by international research teams show that the water characteristics in the upper ocean of the Nordic Seas varied considerably in the different interglacials.

The intensification of the hydrological cycle in the North Polar region as a consequence of global warming threatens to distort the balance of sea surface water properties in the Nordic Seas. The Greenland ice sheet is melting and in parallel we can observe a massive summer sea ice loss in the Arctic. This might have a large impact on the global climate as the area comprises one of the most important elements of the global ocean circulation. Here, deep water is formed via o cooling of dense and salty Atlantic water masses. Due to increased melting of the Greenland ice sheet and Arctic sea ice the salinity and, thus, the density of the surface water masses decreases which can lead to a weakening of the deep water formation. It also directly affects nutrient content and biological consumptions within this layer.

Two new marine geological studies – lead by scientists from GEOMAR Helmholtz Centre for Ocean Research Kiel, the Alfred Wegener Institute Helmholtz Centre for Polar and Marine Research (AWI) in Bremerhaven, the Hong Kong University, with strong support from the Royal Netherlands Institute for Sea Research (NIOZ), Utrecht University (The Netherlands), and the University of Victoria (Canada) – now give further insight into all of these important processes during different past warm periods, using a suite of independent proxy methods on specific sediment core sections from the Nordic Seas.

The first study published in Geophysical Research Letters aimed at reconstructing surface salinities in the Nordic Seas, applying a unique method recently developed at NIOZ. This method is based on hydrogen isotope composition in alkenones, which are organic compounds produced by certain marine algae. “The advantage of this proxy for salinity reconstructions over other methods, such as oxygen isotopes in biogenic calcite, is that it does not suffer from temperature overprints or other effects. By contrary, this new advanced method allows for a more direc estimation of the salinity signal”, says leading author Dr. Evguenia Kandiano from GEOMAR.

The project was focused on an interglacial period MIS 11, centered around 400,000 years ago, that is often described as having had higher-than-present ocean surface temperatures in the North Atlantic and Arctic and a much reduced Greenland ice sheet. But the new sediment core data now show that the ocean surface in the central Nordic Seas were in fact substantially colder and fresher during MIS 11 than today. That discrepancy was likely due to the low saline surface layer in the Nordic Seas as a consequence of continuous melting of the Greenland ice sheet and freshwater input from the Arctic altogether leading to a thicker surface layer which pushed the Atlantic surface water to flow deeper.

The second study, published in the Earth and Planetary Science Letters, proposes the hypothesis that variations in the nutrient utilization in surface water was a consequence of changes in the mixed surface layer thickness during the development of the present and other interglacial periods (MIS 1, 5e and 11). The direct comparison between these three interglacials defines for the first time stratification-induced variations in nitrate utilization up to 25 percent between and within all of these warm periods that highlight changes in the thickness of the mixed-layer. “The major changes of nitrate utilization reconstructed by us thus suggest that a thicker mixed-layer prevailed during older interglacials compared to the present one, and that this was probably related to longer freshwater input from the melting of the larger glacial ice sheets which existed during each of these preceding ice ages” says lead-author Dr. Benoit Thibodeau of Hong Kong University.

The two investigations were based on quite different methods, and yet, “we derived at a similar conclusion, namely, that the thickness of the surface layer directly controls the depth flow of the Atlantic water layer on its way into the Arctic Ocean,” states co-author Dr. Henning Bauch, who works at GEOMAR and AWI. And he adds: “The results not only call for caution when using older interglacials as modern or near-future climate analogues, our findings also help to better understand the effect of freshwater input on climate-sensitive ocean circulation sites like those in the Nordic Seas”. 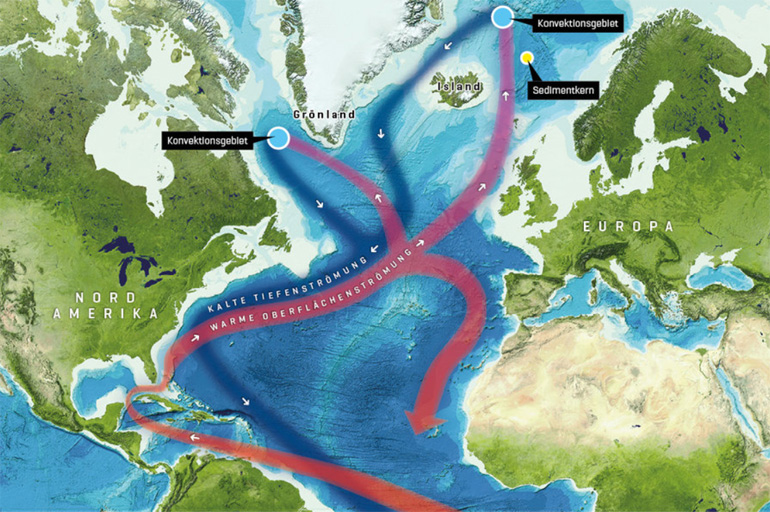