“This comprehensive and timely book provides the reader with a very thorough technical, regulatory, and financial overview of the global solar (PV) industry. Featuring internationally eminent contributors from the who’s who of solar industry experts, this book offers insights, analysis, and background on all the key issues facing this rapidly growing industry. It will be an invaluable reference and resource for scholars, investors, and policymakers dealing with the emerging solar power phenomenon.” Branko Terzic, Atlantic Council and Former Commissioner, U.S. Federal Energy Regulatory Commission

The meteoric expansion of the solar (PV) industry resulted from an incredible reduction in the prices of PV systems—first described in the author’s earlier book Sun above the Horizon. It began early in the new century and continued in the following decade with an extraordinary upswing. As a result, by the end of 2016, the worldwide PV operational power capacity grew to some 300 GW. Most of this increased capacity, 250 GW, was installed during the years 2010–2016.

Suddenly PV started to affect the traditional generation of electricity and helped reduce carbon emissions and other environmental impacts. This book describes how this happened. Three practically unlimited new PV markets—residential, commercial, and utility scale—materialized, along with the new PV-oriented financial systems needed to provide the required gargantuan-scale capital.

This book also highlights the increasing demand for and the corresponding increased supply of PV cells and modules on four continents and the impact of this PV breakthrough on our lives and future. To present this unparalleled story of societal transformation, the author was helped by the contributions of top experts Wolfgang Palz, Michael Eckhart, Allan Hoffman, Paula Mints, Bill Rever, and John Wohlgemuth.

Peter F. Varadi, after a scientific career, was appointed head of Communication Satellite Corporation’s chemistry laboratory in the USA in 1968. In this capacity, he also participated in research on PV solar cells, which were used to power satellites. In 1973, he co-founded Solarex Corporation, USA, to develop the utilization of solar cells for terrestrial applications. Solarex was one of the two companies that pioneered this field. By 1983, it became the largest PV company in the world, when it was sold to AMOCO. Dr. Varadi continued consulting for Solarex for 10 years and then for the European Commission, World Bank, National Renewable Energy Laboratory (NREL), and other organizations. In recognition of his lifelong service to the global PV sector, he received in 2004 the European Photovoltaic Industry Association’s John Bonda prize. His book Sun above the Horizon, which describes the meteoric rise of the solar industry, was published in 2014. 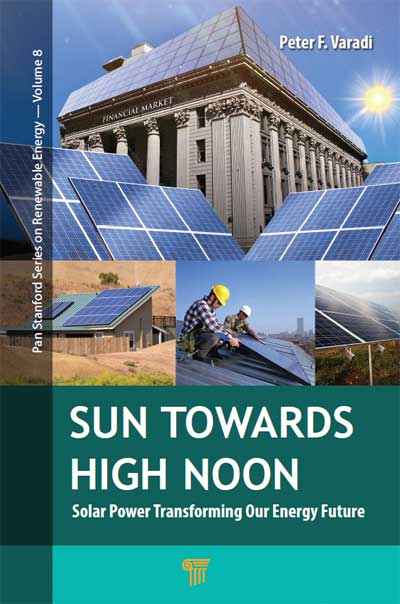