A Team of international researches found new connections between the solid earth and the climate system.

Throughout the last 800,000 years, Antarctic temperatures and atmospheric carbon dioxide concentrations showed a similar evolution. However, this was different during the transition to the last ice age: approximately 80,000 years ago, temperature declined, while the carbon dioxide content of the atmosphere remained relatively stable. An international research team led by the GEOMAR Helmholtz Centre for Ocean Research Kiel and the Alfred-Wegener-Institute Helmholtz Centre for Polar and Marine Research has now discovered that a falling sea level may have caused enhanced volcanic activity in the ocean, which can explain the anomaly. The results are published today in the journal Nature Communications.

Climate evolution shows some regularities, which can be traced throughout long periods of earth’s history. One of them is that the global average temperature and the carbon dioxide concentration in the atmosphere usually go hand-in-hand. To put it simple: If the temperatures decline, the CO2 values also decrease and vice versa.

However, there are exceptions. An international team of scientists led by the GEOMAR Helmholtz Centre for Ocean Research Kiel and the Alfred-Wegener-Institute Helmholtz Centre for Polar and Marine Research has now discovered a possible cause for such irregularities. An example is the last transition to glacial conditions. At approximately 80,000 years ago the temperatures declined, but the amount of carbon dioxide in the atmosphere remained relatively stable for several thousand years. The reason for this could be enhanced volcanic activity in the oceans induced by a falling sea level. The study is being published today in the journal Nature Communications.

During the development of glacial conditions temperatures decrease and ice sheets form, resulting in the redistribution of water from the ocean to continental regions. Thus, the sea level falls and the pressure on the on the seabed and thereby in the earth’s crust decreases, which enhances magma production.

“To better understand and quantify these processes, we developed a comprehensive computer model that we integrated with geodynamic data. In addition to this we analyzed paleo-climate data and carried out simulations with a model of the global carbon cycle,“ Dr. Jörg Hasenclever, the lead author of the study explains the approach of the team. The study investigated the response of mid-ocean ridges and of 43 ocean island volcanoes to glacial sea level changes.

“Our approach has shown that the decreasing pressure at the seafloor could have induced increased lava- and carbon dioxide emissions. The enhanced volcanic carbon dioxide flux may have stabilized the atmospheric carbon dioxide concentrations during the climate system’s descent into the last ice age“, adds Prof. Dr. Lars Rüpke of GEOMAR.

The investigations suggest that close interactions between the solid earth and the climate system exist also on geologically relatively short time scales of about 5,000 to 15,000 years. Co-author Dr. Gregor Knorr of the Alfred-Wegener-Institute further explains: “Such interactions could provide a novel component for earth system research to better understand the climate evolution at times of glacial sea level changes.” 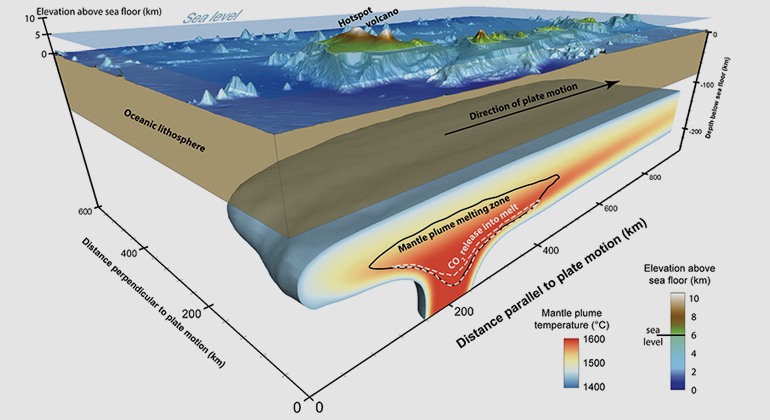