Air pollution has significant impacts on the health of Europeans, particularly in urban areas, according to a new report from the European Environment Agency (EEA).

While air quality is slowly improving, air pollution remains the single largest environmental health hazard in Europe, resulting in a lower quality of life due to illnesses and an estimated 467 000 premature deaths per year.

The EEA report ‘Air quality in Europe — 2016 report’ presents an updated overview and analysis of air quality in Europe from 2000 to 2014 based on data from official monitoring stations across Europe, and including more than 400 cities. It shows that in 2014 around 85 % of the urban population in the EU were exposed to fine particulate matter (PM2.5) at levels deemed harmful to health by the World Health Organization (WHO). Particulate matter can cause or aggravate cardiovascular diseases, asthma and lung cancer.

“Emission reductions have led to improvements in air quality in Europe, but not enough to avoid unacceptable damage to human health and the environment,” said EEA Executive Director Hans Bruyninckx. “We need to tackle the root causes of air pollution, which calls for a fundamental and innovative transformation of our mobility, energy and food systems. This process of change requires action from us all, including public authorities, businesses, citizens and research community.”

Karmenu Vella, European Commissioner for the Environment, Maritime Affairs and Fisheries, welcomed the report and added: “Today’s  EEA report on air quality reminds us that we need to keep this subject high on the political agenda. The European Commission is doing so, and is committed to securing improvements in air quality. One way we can do that is to help different levels of government work better together. If a lot of air quality blackspots are in towns and cities then it is clear that local and regional governments play a central role in finding solutions. This week I hope that the European Parliament will vote positively on our reduction commitments in the new National Emission Ceilings Directive. This will provide direction for national and local actors.”

The report highlights that air quality has however improved over the years. The annual average PM10 has fallen in 75 % of monitored locations during the period 2000–2014. Similarly, PM2.5 concentrations, on average, have decreased between 2006 and 2014 for all station types (urban, traffic, background sites, etc.). Exposure to PM levels above WHO recommendations have also decreased over the years.

Following the political agreement reached with the Council in June of this year, the European Parliament formally votes this week on the revised National Emission Ceilings (NEC) Directive. Member States are subsequently also expected to confirm their agreement of the revised directive before the end of 2016. The legislative proposal will establish new national emission reduction commitments applicable from 2020 and 2030 for SO2, NOx, NMVOC, NH3, and PM2.5 which will help Member States in their efforts to improve air quality.

(1) A number of variables, including population density and exposure, total mortality figures and demographic changes such as ageing are taken into account when calculating these estimates. They can vary from year to year. 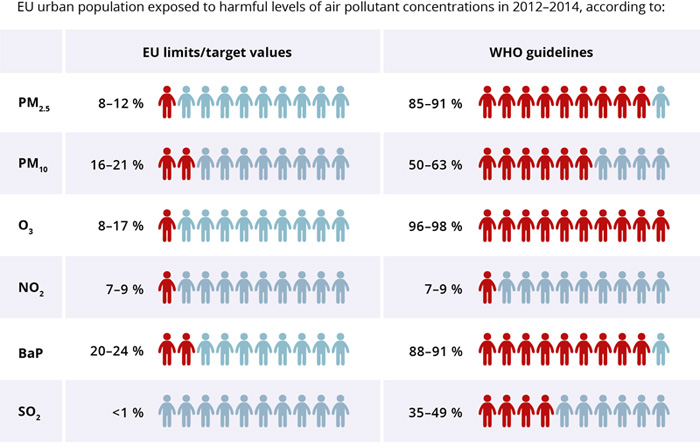 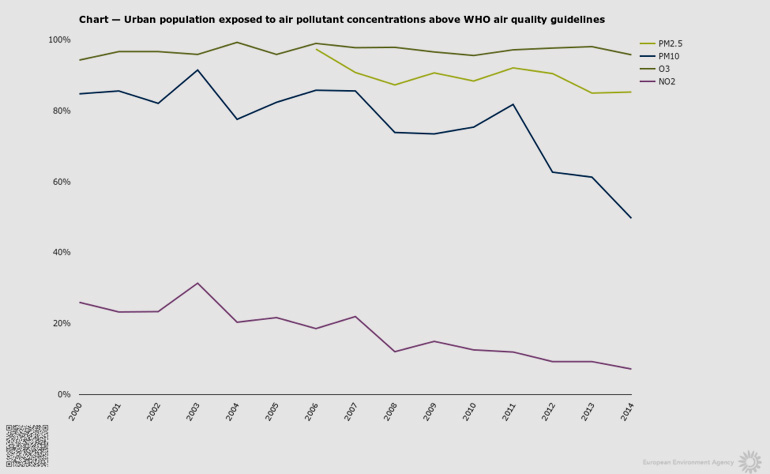