For the second time in just 12 months, scientists have recorded severe coral bleaching across huge tracts of the Great Barrier Reef after completing aerial surveys along its entire length. In 2016, bleaching was most severe in the northern third of the Reef, while one year on, the middle third has experienced the most intense coral bleaching.

“The combined impact of this back-to-back bleaching stretches for 1,500 km (900 miles), leaving only the southern third unscathed,” says Prof. Terry Hughes, Director of the ARC Centre of Excellence for Coral Reef Studies, who undertook the aerial surveys in both 2016 and 2017.

“The bleaching is caused by record-breaking temperatures driven by global warming. This year, 2017, we are seeing mass bleaching, even without the assistance of El Niño conditions.”

Dr. James Kerry, who also undertook the aerial surveys, explains further, “this is the fourth time the Great Barrier Reef has bleached severely – in 1998, 2002, 2016, and now in 2017. Bleached corals are not necessarily dead corals, but in the severe central region we anticipate high levels of coral loss.”

“It takes at least a decade for a full recovery of even the fastest growing corals, so mass bleaching events 12 months apart offers zero prospect of recovery for reefs that were damaged in 2016.”

Coupled with the 2017 mass bleaching event, Tropical Cyclone Debbie struck a corridor of the Great Barrier Reef at the end of March. The intense, slow-moving system was likely to have caused varying levels of damage along a path up to 100 km in width. Any cooling effects related to the cyclone are likely to be negligible in relation to the damage it caused, which unfortunately struck a section of the reef that had largely escaped the worst of the bleaching.

“Clearly the reef is struggling with multiple impacts,” explains Prof. Hughes. “Without a doubt the most pressing of these is global warming. As temperatures continue to rise the corals will experience more and more of these events: 1°C of warming so far has already caused four events in the past 19 years.”

“Ultimately, we need to cut carbon emissions, and the window to do so is rapidly closing.” 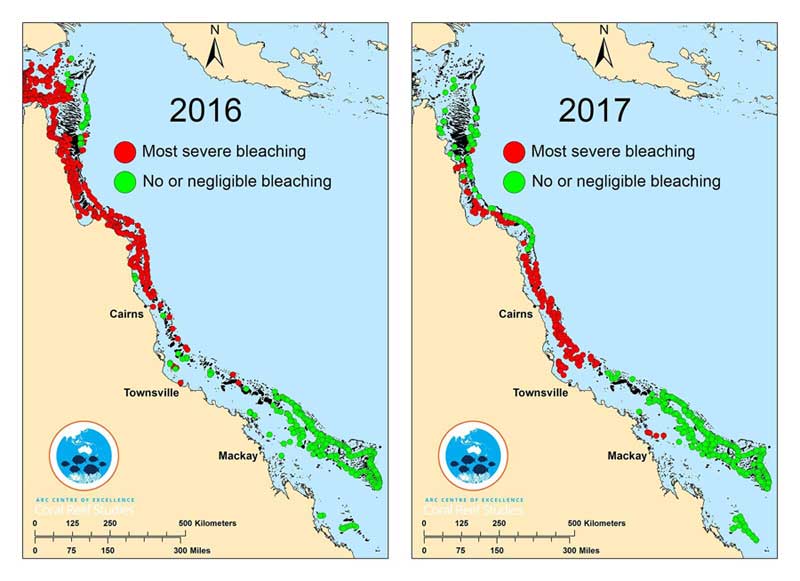