When the United States president says, “America first,” he is making his voters happy. I can understand that. But from a global perspective, this statement isn’t relevant. Everything is interconnected today. The new reality is that everyone is interdependent on everyone else. The United States is a leading nation of the free world. For this reason I call on the US president to think more about global-level issues. There are no national boundaries for climate protection or the global economy. Also, no religious boundaries. Now the time has come to understand that we are the same human being on this planet. Whether we want to or not, we must coexist. History tells us that when people pursue only their own national interests, there is strife and war. This is shortsighted and narrow-minded. It is unrealistic and outdated. Living together as brothers and sisters is the only way to peace, compassion, mindfulness, and more justice.

President Trump’s politics and his warlike rhetoric have led to division in the United States and all over the world: between black and white, Americans and foreigners, Democrats and Republicans, rich and poor. Religion can to a certain degree help to overcome this division. But religion alone will not be enough. Now global secular ethics is more important than the classical religions. We need a global ethic that can accept both believers and nonbelievers, including atheists.

My wish is that one day, formal education will pay attention to the education of the heart, teaching love, compassion, justice, forgiveness, mindfulness, tolerance, and peace.  This education is necessary from kindergarten to higher-level schools and universities. I mean social, emotional, and ethical learning. We need a worldwide initiative for educating heart and mind, in this modern age.

At present our educational systems are mainly oriented towards material values and training one’s understanding. But reality teaches us that we do not come to reason through understanding alone. We should place greater emphasis on inner values.

Intolerance leads to hatred and division. Even our children should grow up with the idea that dialogue, and not violence, is the best and most practical way to solve conflicts. The young generations have a great responsibility to ensure that the world becomes a more peaceful place for all. But this can only become reality if our educational systems educate not only the brain but also the heart. The educational systems of the future should place greater emphasis on strengthening human abilities, such as warm-heartedness, the sense of oneness of humanity and love.

I see with ever greater clarity that our spiritual well-being depends not on religion, but on our innate human nature, our natural affinity for goodness, compassion, and caring for others. Regardless of whether or not we belong to a religion, we all have a fundamental and profoundly human wellspring of ethics within ourselves. We need to nurture that shared ethical basis. Ethics, as opposed to religion, are grounded in human nature. And that is how we can work on preserving creation. That is religion and ethics put into practice. Empathy is the basis of human coexistence. It is my belief that human development relies on cooperation and not competition. That is scientifically proven.

We must learn now that humanity is all one big family. We are all brothers and sisters: physically, mentally, and emotionally. But we are still focusing far too much on our differences instead of our commonalities. After all, every one of us is born the same way and dies the same way. It doesn’t make much sense to take pride in our nations and religions – all the way to the graveyard! 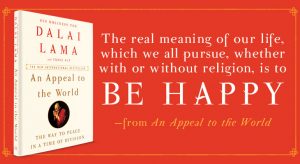 “According to his coauthor, Alt, the Dalai Lama, in various surveys, has been voted the nicest person in the world. And no wonder if this book—an extended interview with the man known to the world as His Holiness—is any evidence. To one question from Alt, for example, he answers, “I am mainly preoccupied by the desire to contribute to the good of humanity.” Interestingly enough, this is less in the context of religion, as one would expect, than of secular ethics. The Dalai Lama has come to believe, as is stressed repeatedly throughout this small book, “ethics are more important than religion. We are not members of a particular religion at birth. But ethics are innate.” As are, he goes on to affirm, love, benevolence, and affection. In realizing these ideals, he stresses the need for mindfulness and for more listening, contemplation, and meditation (he meditates four hours per day). Always inspiring and accessible, this lovely book is, itself, readers will discover, worth meditation and contemplation.” Michael Cart “Booklist”