In the wake of the Fukushima disas­ter wind power has increased in importance in energy transition. The problem, of course, was never a lack of wind but the dependence of most societies on the old energy economy, and some have only too happily continued to operate their old nuclear plants.

I recently gave a talk at the World Wind Conference in Bonn, Germany. I have in recent decades rarely experi­enced greater optimism at events. The industry believes in its future. ‘The future belongs to renewable energy, as it delivers not only ecological but also economic benefits. And it can be ethically justified – unlike coal, gas, oil and nuclear energy’, a keynote speaker said at the Bonn conference.

Solar energy is in general the most popular source of renewable energy. However, wind power in generating electricity has been the most dynamic source in recent years and the efficiency of windmills has increased enormously. At the Bonn conference, completely new technologies were introduced, which can increase the efficiency of classical wind turbines many times over – such as the concentrator wind technology WINGA, which was developed in Canada. The generator wind turbine concentrates the wind in a funnel, and works on the principle of a tornado. Worldwide, more and more small wind turbines are being installed on rooftops – almost completely silent and already producing electricity from two meters per second wind speed.

In China the production of electric­ity from wind tunnels has increased in the last five years by about 1,000 per cent. By 2020 the ‘Middle Kingdom’ wants to increase its wind power by tenfold again. ‘The model is the devel­opment in Germany’, said my Chinese conversation partners in Beijing. After Fu kushima the Chinese government is also rethinking its current nuclear plans. The future belongs also in China to renewable energy’, the former Chinese environment minister told me in 2006. Today China produces six times more solar panels than all 27 countries of the European Union combined – the United States, India and Spain have also grown in the expansion of wind power.

Wind power is, like the sun, a free gift from the heavens that is available for all time – leaving no diesel soot and no nuclear waste. It saves the environ­ment, in country after country, from tens of millions of metric tons of greenhouse gases. Wars are fought over oil, but the wind will never be a reason for war. Every wind turbine is a sign of peace. War over oil or peace from sun and wind? This is one of the key policy issues of the 21st century.

Also terrorists will never launch an attack on a windmill, since nothing happens there. However, they can relatively easily, by an airplane or using nuclear weapons, organise a dreadful attack on a nuclear power plant. Thus getting away more and more each year from nuclear power means a bit more security. It means less atomic waste, which nobody knows how to dispose of safely. One thing we do know is that nuclear waste radiates for up to a million years.

On the Baltic island of Fehmarn, 150 wind turbines are in operation and bring four times more electricity than all the 12,000 inhabitants of the island and the three million yearly visitors consume together. A mayor on the island told me of initial opposi­tion to the windmills, which died down, however, when the residents became convinced of the real benefits of a climate and environmentally friendly power production on the site.

A few years ago in the community of Dardesheim in Sachsen-Anhalt, Germany, I was allowed to dedicate a wind farm with 16 wind turbines – in the meantime 15 more have been added, and only recently the largest wind turbine in the world was installed there, a six-megawatt plant. The small community of about 1,000 residents is now producing clean electricity for 40,000 people. One in three residents has a financial interest in the wind farm. Every year this wind farm saves the environment 160,000 metric tons of greenhouse gases. And the mayor is happy about the good business-tax revenue.

Today in Germany, wind energy provides about nine per cent of the electricity. About 250,000 people have invested their money in wind turbines. Recent surveys show that 77 per cent of Germans want to make a personal contribution to the energy transition, even if it costs money.

If the United States would tap into the full potential of wind power to generate energy, three times as much electricity as the country uses today could be produced per year. And the US consumes a lot of electricity!

With production costs of between five to seven cents per kilowatt hour, wind power is already the least expensive of all renewable energies. One thing is clear: Anyone who rejects wind farms is with this attitude accepting the construction of coal­fired or nuclear power plants. Those looking for an energy policy without fossil fuel and nuclear energy sources cannot do without wind power.

Wind power instead of nuclear power

It is high time for building a renew­able energy economy. Climate change is happening so dramatically fast that we must overcome the think­ing in old energy structures quickly. It means:

Our energy problems can be solved in an ecologically friendly manner. Countries can change from coal and nuclear dependence to solar and wind environments.

I am sure that the number of people who have a favourable view of renewable and environmentally friendly wind power and who derive hope for the future from this is far greater than the number of those who generate a lot of wind against wind power with very breezy arguments – be they ‘conservationists’ or energy monopolists and politicians depen­dent on them. Dogmatized nature conservation calls itself into question. Without tens of thousands of additional wind turbines in many countries there will be no escape from the climate disaster. Wind power is an indispensable contribu­tion to an ecological, natural energy production. Wind energy helps protect the environment and of course therefore also nature conser­vation. In times of global warming from the greenhouse effect, there can be no effective landscape conserva­tion without climate protection. Anyway, wind turbines form part of the climate-protecting renewable energy mix, when placed in favourable locations.

In some places the still fierce battle against windmills reminds me of the irrational opposition to the first railroads ages ago, including flyers stating that railroads were irresponsi­ble because at the ‘high speed of 28 kilometres per hour cows drop dead in terror along the railway tracks’.

Often I also hear the argument that wind power and solar power are uncertain. Is oil from Libya or natural gas from Siberia certain? What is certain is that oil and gas will expire in the coming decades and will become unaffordable much sooner.

The objection that windmills disfigure the landscape is peculiar. No form of energy production occupies as little space as wind  energy. Thankfully, resistance is waning. I have ‘opened’ about 300 wind turbines and wind farms world­wide in the last two decades. Wherever the local population is involved in wind farms, the opposi­tion is very soon over. The renewable energy transition can only be organ­ised through decentralised structures. The motto for successful energy cooperatives is that the energy for the region comes from the region!

The sun is the largest source of energy. Every second it sends 15,000 times more energy than all seven billion people currently use. But the wind is also a free gift from the heavens, and it theoretically provides us with 308 times more energy than we consume. Of course, the wind does not blow for ever , and the sun does not shine everywhere. But the two major renewable energy sources are complementary. Often the wind blows when the sun is not shining, and often the sun shines when the wind stops blowing.

We will succeed only step by step in the necessary conversion to one hundred per cent self-sufficiency with renewable energies. As with the woman who after the fourth visit to my talks in six years told me laughing: ‘After your first lecture we installed a solar panel on the roof. After the second a photovoltaic system. After your third talk we installed a pellet heating unit in the basement and now, after your fourth lecture, we will join financially in a wind farm.’ 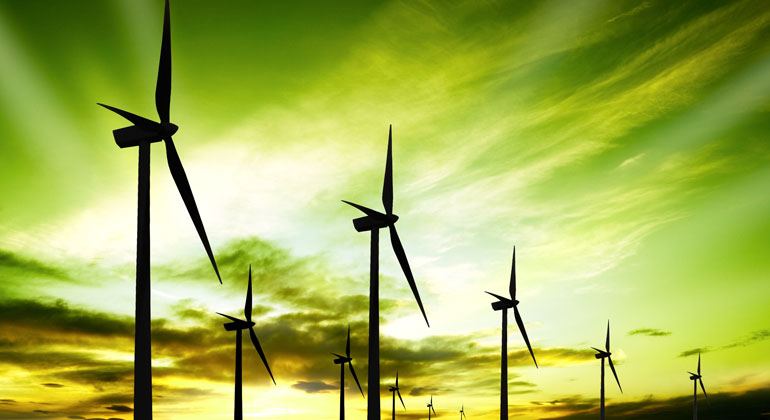