Shortly before Christmas 2016, Russia’s autocrat Putin as well as his new opponent, US egomane Trump, announced plans to “modernise” their nuclear arsenals. Are we heading in 2017 for another nuclear arms race or a renewal of the Cold War? In his new book, just published together with TV journalist Franz Alt, Mikhail Gorbachev, who overcame the Cold War of the past, warns against this trend.

Due to his book “Peace is Possible” Alt had, in the 80s, great influence on the peace movement in East and West. This book was published in 12 languages and was sold a million times in Germany alone.

Referring to his latest book “Come to your senses at last – no more war“ Franz Alt writes:

At the end of last October, we’re sitting in the Gorbachev Foundation in Moscow, adding the finishing touches to our common book. Outside the first snow is beginning to fall. The frosty weather fits well to the present climate between Russia and the West.

Gorbachev, however, is still speaking imperturbably of “possible reconciliation” and recalls that even in the Cold War 30 years ago, reconciliation and disarmament were made possible by mutual trust. On TV, President Putin, according to Gorbachev, had, the night before, also spoken of reconciliation.

While I object that Putin’s words and deeds often contradict each other, he says: “Wait and see. We need patience. That is what I expect from both sides. At present everybody is making mistakes. I still see the threat of a nuclear war, as long as the last atomic bomb hasn’t been dismantled. Such a war would be the final one in the history of mankind. Nobody would be left to start another war.”

I am convinced that this voice of reconciliation and reason is today as important as in the past century, when the world was on the brink of a nuclear abyss. Hence our book with the voice of a great politician. On my flight to Moscow I read in Western newspapers appalled comments on Russian bombs in Syria. Shortly afterwards in Moscow papers, there were similar reactions to Western bombs in the Middle East. Are there good bombs and bad bombs? The good ones from our side and the bad ones from the other side?

On my visit I also learn that Mikhail Gorbachev co-founded and sponsored the Nowaja Gazeta, one of the few independent newspapers in Russia. He is still a shareholder. Since the year 2000 five journalists of this paper – among them the famous Russian journalist Anna Politkowskaja – were killed and several other colleagues severely injured. This paper was the only one in Russia to co-investigate into the Panama Papers – much to the discontent of the Russian rulers.

In these times with new enemy stereotypes there is a vital need for a mediating and reconciling voice like 85-year-old experienced and courageous Mikhail Gorbachev.  He consistently cherishes his idea: “No more war! Peace is possible. Always. That is a matter of reason and practical intelligence.”

I now ask him whether he is disappointed about today’s Russia and whether his lifework, “glasnost” (opening) and “perestroika” (change), is today destroyed.

“It is not disappointment but deep concern about the situation in Russia and all over Europe,” he says. And evading my question whether he is happy: “There are no happy reformers. Only very few could reap the harvest of their reforms themselves.  But I had the historic chance to contribute to a real change for the better in my own country and a positive change all over the world. That is what I am grateful for.”

This strikes a German journalist as pure modesty, considering that we owe Mikhail Gorbachev the peaceful reunification. “In Russia,” he says, “perestroika came to a standstill, it is true, but today millions of Russians and many people in other countries can still enjoy the fruits of my reforms. My lifework is not dead.” How did he cope with his resignation as president of the Soviet Union 25 years ago? “That was, back then, a coup against me. But if I hadn’t resigned, a civil war might have broken out. My resignation was my victory.”

The grand old man had welcomed me for a three-hour-talk with these words: “I’ve been living without Raissa for 17 years now.” In his foundation I see many pictures of his wife, far more than of US President Bush, Helmut Kohl or of the then Soviet political leaders.

Whoever has often met Gorbachev knows about his intimate relationship with Raissa and the great love that united this couple. 20 years ago, I asked him in an interview on the TV channel ARD from where he drew the strength for his controversial reforms. Laughing, he pointed at his wife, who was standing behind the camera. She smiled back. This was t h e couple in the political world of the 20th century. Mikhail learnt from Raissa that confidence is the gold standard of all relations, be they private or international.

In politics this means: Seeing and understanding matters from the other’s point of view. Only like that, Gorbachev keeps saying, do you find common interests. And only on the basis of such fundamental trust could he risk a policy of unilateral concessions. As early as 1996 he had told me: “Only with the support of the Western peace movement could I implement my policy of disarmament against the hardliners in the Kremlin.”

Our book will first appear in seven languages – next to German, also in Russian, English, French, Spanish, Portuguese and Chinese. The title shows how worried the ex-politician is today about the situation in Europe. “The cold war is back. It could even become a hot one,” he warns, adding: “In the eighties, we were sitting on top of a nuclear volcano. Peace was hanging by a thread. But still, President Reagan and I found a way to nuclear disarmament. 80% of all nuclear arms could be dismantled. Why shouldn’t be possible today what was possible back then?”

And still optimistically, he now asks in our book: “Why do today’s politicians not follow this example? Both sides, the West and Russia, are continuously making mistakes, the chief mistake being that, after 1991, the West played the winner over the Soviet Union and keeps provoking it until today. Even militarily. You don’t make peace by sabre-rattling. Many agreements were not kept by the West.”

“In those days you dissolved the military Warsaw Pact. Should the West at least dissolve NATO now? Would that be a contribution to peace and détente?” I enquire. “For that it is too late”, Gorbachev replies resignedly.

Concerning domestic politics he criticizes his present successor Putin harshly. However, he refrains from criticizing his foreign policy, although Putin is not much of a pacifist, as his policy concerning Syria has amply proved. “Both sides have to disarm. You should build trust in Putin. He also is good at heart. We need patience,” Gorbachev says, adding: “Thinking of peace means thinking of our children. That is essential. Another nuclear arms race would be madness and contrary to our practical intelligence.”

Only by overcoming existing enemy stereotypes can we find new ways to peace. Therefore we do need politicians like Mikhail Gorbachev, who once had the courage to take the first step to disarmament. He made possible what had seemed impossible. Today, however, I don’t see anybody around like Gorbachev – neither in the West nor in the East.

Even a quarter of a century after his resignation, “Gorbi” has not lost his sense of humour. Bidding farewell he rises, clutches his crutch, and says with a laugh: “For two years I’ve been walking on three feet.” In the West, he is considered a hero by most people, yet in Russia by many a “traitor”. This man ultimately destroyed an empire and left millions of loyalist officials unemployed and politically homeless. He receives murder threats almost daily.

It is his achievement that 30 years ago, the “nuclear balance of fear” became a balance of reason – at least for a while. We can and have to learn from him. We can still realize the far-sighted vision of the Nobel Peace Prize winner and build our “common house of Europe”. Today we need global glasnost and global perestroika. And no further NATO troops along the Russian border. 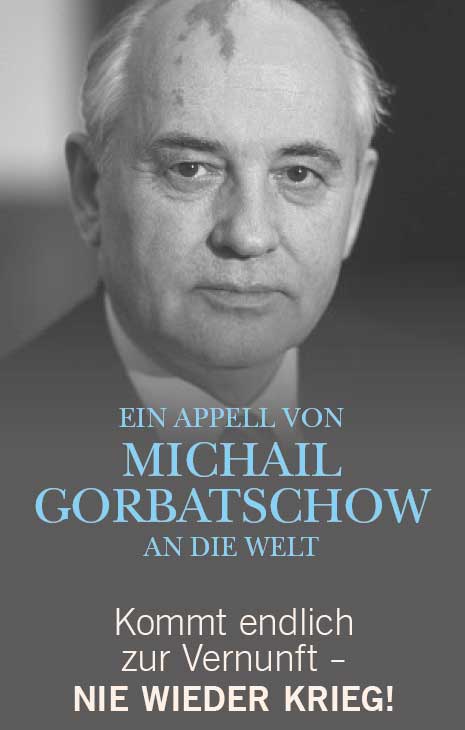