Hydropower has long been a competitive form of electricity production from renewable energy sources. It is available round the clock and can also be used to store energy – in future in combination with wind and solar energy.

A ‘daughter’ of solar energy

The history of hydroelectric power is thousands of years old. Historians assume that it was already in use in China 5,000 years ago. Cultures along the Nile, Euphrates and Tigris rivers as well as the Indus as far back as 3,500 years ago used the first wateroperated machines in the form of waterwheels to irrigate their fields.

From the 18th century the first waterwheels were made of cast iron, which was an essential contribution to the industrial revolution, because it forged greater achievements through its high resilience. The increase in productivity linked with this led to enormous economic boom. In 1866 Werner von Siemens invented the elec tro-dynamic generator, which made it possible to convert water energy to electric power. In 1896 the first large-scale power plant in the world was built in the USA at the Niagara Falls.

Hydropower draws its energy from the natural cycle of water, caused by  evaporation, rain and runoff. This cycle is also maintained by the sun. Hydropower is, like the wind and biomass, a ‘daughter’ of solar energy.

Worldwide, hydropower supplies 16 per cent of the electricity. Norway, Iceland and Ghana produce electricity almost exclusively from hydropower. As the construction of huge hydroelectric power plants in the less developed countries often leads to displacement of people and major environmental problems, for example, in China, India or Brazil, it makes more sense to use hydroelectric power decentralised and build or reactivate many small and medium-sized plants.

Today, in the face of climate change, the approval process for a hydropower wheel can still last many years and even decades. Many environmentalists, too, raise objections. Nature protection that does not understand that as a result of the climate we race towards an unprecedented natural disaster, does not deserve its name. Only an integral nature conservation deserves this name of honour.

With renewable energy from hydropower we can obtain clean energy in any weather: through rain, sun and wind. The renewable energy sources often complement one another, depending on weather and  wind conditions. We can use an allweather ecology.

A question that is often asked is: how environmental and fish-friendly is hydropower? Hydropower is ecological and contributes considerably to preservation of biodiversity. Almost all hydropower plants are now equipped with an extensive fish protection. It is true that biodiversity and native fish populations have been declining for decades in a number of areas, including where the fish population was once rich in species even though there were more power plants. The real reasons for the disappearance of many species of fish are the increasing fishing, the acidification of soils and forests, as well as chemicals used in conventional agriculture. All small hydropower stations are equipped with an effective protective screen. No fish can swim through this screen. Fish ladders guarantee fish migration. The vast majority of the hydroelectric power plants have bypassing streams or creeks for fish.

Unlike many new-economy projects, hydropower is considered by many shareholders as crisis-proof. The ten largest hydroelectric power producers in the world today are: Canada, with about 340 billion kilowatt hours per year, Brazil and the U.S., each with 305, China with 230, Russia 160, Norway 120, Japan with 85, as well as India, France and   Sweden, each with 80 billion kilowatt hours per year.

The power of the sea

More than 75 per cent of the earth’s surface is covered by water, most of which is the sea. The energy sources in the world’s oceans are to a huge extent an untapped resource.

The overall performance of the surf breaking on shorelines in the world exceeds two trillion watts and would theoretically be sufficient to cover mankind’s energy needs 76 times. This means that in a practical sense a lot more energy can be obtained from the power of the ocean.

In Christmas 2004 I saw the impact on the South Indian coast of the tsunami that took 220,000 lives along the entire Indian Ocean and caused billions of dollars worth of damage. How would it be if we were able to harness the immense power of the ocean for energy, I asked myself at the time!

Many countries have extensive coastlines. The use of wave and tidal energy of the oceans makes both ecological and economical sense. Sea waves are kindled mainly by wind, apart from the effect of sun and moon. Besides the wind-induced gravity waves, ebb and flow are also of importance for power production. The tides are caused by the gravitational forces of the sun, moon and earth. In Saint Malo on the French Atlantic coast a tidal power station has been producing clean electricity for 250,000 people for many decades.

In theory, an area of ocean the size of Spain would be sufficient to meet the entire world’s energy needs – wave energy experts calculate that a sea area of two square kilometers can already replace a nuclear power plant.

According to calculations of the Portuguese ‘Wave Energy Centre’, individual countries such as Ireland can generate their total energy needs from wave power.

Nature provides us theoretically with a thousand times more energy than all the people use today: On its  own, hydropower offers us theoretically half of our current consumption, bioenergy 15 times more than we use at present worldwide, the power of ocean currents and waves – as already mentioned – 76 times more, wind energy 308 times more and the sun – as described at the beginning of the series – 15,000 times more. It means that for all practical purposes we have what all the people can use for all time, with no unsolvable problems.

Interaction of sun and moon

Power from the sea can also be used through the natural interplay of sun and moon. The sun brings about evaporation, rain and differences in temperature, which cause winds – the moon organises tides by gravitation in interaction with the earth’s rotation.

Thus we can use ocean energy via:

The energy of waves harnessed on the coasts of countries can in future generate part of the power supply. After initial trials, scientists are confident that electricity from waves can be harnessed for 10 cents per kilowatt hour. This price is not competitive with the old energy sources today but is likely in a few years. In England electricity from waves is currently reimbursed at 15 cents per KWh.

The already mentioned energy potentials of sun, water, wind, biomass, geothermal and wave power make it clear that with political will and willingness to learn on the part of energy consumers, sweeping energy transition is possible in a few decades. And by the year 2030!

Energy reserves in the ocean

The first floating combination of wind and water power station exists as a prototype off England’s coast. Similar projects are planned for the Cape of Good Hope in South Africa.

The sun stores enormous amounts of energy in the oceans. Proponents of  thermal power stations are of the opinion that we only needed to tap the ocean and through tidal power stations have enough renewable energy for good. The theoretical energy potential of the sea is eight times as large as the current energy needs of mankind.

Temperature gradient of the oceans is our great reserve potential. Maybe we do not need it at all. Because hydropower is inexpensive and environmentally friendly, Norway produces 98 per cent of its electricity by means of water – despite its vast oil and gas deposits. In the US west coast city of Seattle, for example, in which the most energy-intensive high-tech companies such as the aviation and aerospace group operate, hydroelectricity costs only a fraction of the kilowatt hour price of nuclear electricity in New York or Chicago.

In this series we have now considered the six major pillars of future energy supply:

We have not just used but consumed the old energy sources. When we consume gasoline or burn oil, these resources are gone for almost all time. That is why with the fossil fuel and nuclear resources, we burn the future of our children.

But now with renewable energies we have for the first time the possibility to solve the energy issue for all time. Now what the indigenous peoples have always known can become true: ‘We have not inherited this planet from our parents – we have borrowed it from our children.’

With renewable energies we can do what is the reason for our being here: Help with preserving Creation. The energy issue is the moral challenge of our time. 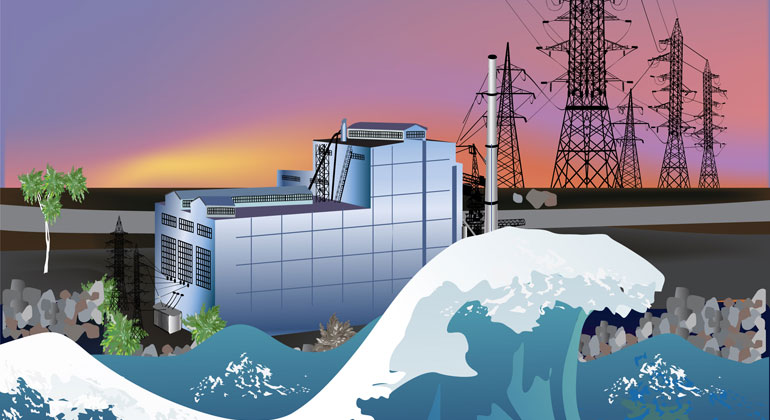