China and India are rapidly scaling up renewable energies and are both on track to meet their climate targets | Climate policies of new US administration may constrain investment climate but good prospects for renewables to continue their boom anyways.

To reach the Paris Agreement climate goal, and stay under 2°C warming, emissions will need to peak in the coming years and be reduced to zero by 2050. China, India and the US play a key role in achieving this target as they emit over 50% of the global CO2 emissions and are by far the largest markets for renewable energies.

Published today, the Allianz Climate & Energy Monitor Deep Dive aims to inform investors and policy-makers on the scale of investments needed in China, India and the US to be in line with the Paris goals; and what recent developments, especially regarding the leadership change in the US, mean for investing in renewable power in the future.

Investments in China and the US need to roughly double, in India even triple, to remain within the Paris Agreement warming limit.

Renewable power investments will need to rapidly grow in the coming two decades to be in line with the Paris Agreement targets. According to UNEP and Bloomberg New Energy Finance (BNEF), in 2016, combined investments in renewable electricity in China, India and the US amounted to USD 134 billion. These accounted for over half of the global investments in electricity supply in 2016.

China and India overshoot their renewable energy targets regularly and are exiting coal.

China and India are currently well on track to achieve their climate targets set for the Paris Agreement.

China aims to increase the renewable energy capacity by 38% in 2020 compared to 2015 levels, equaling 680 Gigawatt (GW) of installed capacities and investments of USD 361 billion in renewable energies. For comparison: Germany, which ranked first in the Allianz Climate & Energy Monitor 2016 for its renewable energy policies, currently has roughly 100 GW renewables installed. A new park of 10 wind mills has around 0.04 GW of capacity.

India is also developing its renewable energy capacity at a rapid pace. In 2016, solar and wind installations exceeded the annual goal by 43% and 116% respectively. For 2022, India plans 175 GW of installed renewables. With market forces set into action by a clear policy intent, India is expected to comfortably achieve its climate targets.

Staunch support for renewables in individual US states.

In the US, renewables are booming with more than 16 GW of wind and solar capacities installed in 2016, accounting for 60% of all new capacity (27 GW). This has been driven by ambitious Renewable Portfolio Standards in various US states and tax credit schemes on federal level as well as the decline in costs for renewables.

“Rapidly falling technology costs for renewables and strong investment conditions at the state-level continue to make the US attractive for institutional investors like Allianz, despite a constraining outlook on support from the federal level from 2020 onwards”, says Thomas Liesch, Senior Project Manager at Allianz Climate Solutions.

If the US drops out of the renewable triad mid-term, the EU could emerge as the third global pillar.

“With policy retrenchment beginning to take shape under an ‘America first’ energy blueprint, we expect China and India to outcompete the US – for the second-consecutive year – in providing an effective and reliable green policy environment”, says Ritika Tewari, Climate Policy Analyst at NewClimate Institute.

China, India and the US can play a leading role on the pathway to a global energy transition. But the outlook for federal policy ambition is worsening in the US from a climate perspective. For achieving the worldwide transformation with stable trends and good conditions another frontrunner is needed. “The EU could replace the USA and take the economic chances” explains Jan Burck (Germanwatch), co-author of the study. “With the current G20-presidency Germany plays additional a crucial role: The German government needs to convince the other G20-states to set up own climate protection plans.” 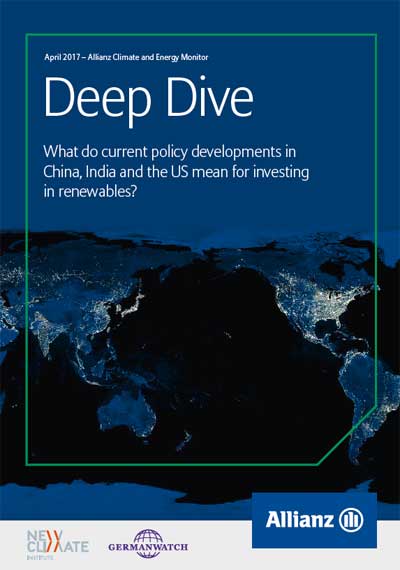