G20 major cities, including Buenos Aires, Paris & Tokyo present the Urban 20 joint position to President Mauricio Macri ahead of G20 Summit in Argentina. irst ever U20 Mayors Summit concludes with call for nation states to work hand in hand with cities.

G20 nations today received an urgent call from the mayors of their major cities: “work hand in hand with us to achieve our collective goal of fair, inclusive, and sustainable development.” Cities from G20 member states, known as the Urban 20 (U20) delivered their recommendations on climate change, the future of work, social integration, women empowerment and access to finance in a communiqué delivered to Mauricio Macri, President of Argentina and the G20. President Macri committed to share the U20 recommendations with world leaders at the upcoming G20 Summit in Buenos Aires.

The communiqué, endorsed by the mayors of 34 cities, representing 1.5 billion citizens, called on G20 member states to implement a series of measures, including:

● Fully and rapidly implement the Paris Agreement, to achieve emissions neutrality by 2050 and keep global atmospheric temperatures from rising above 1.5°C.

● Accelerate a global shift away from fossil fuels toward clean and renewable energy, including carbon pricing that reflects the social cost of carbon.

● Work proactively to make societies more inclusive, welcoming, peaceful, safe, and discrimination-free by providing spaces and opportunities for all people to interact, build connections, and form meaningful relationships together.

● Support the social integration of migrants and refugees, by helping them overcome specific barriers to participation and inclusion.

● Simpler and more direct access to financing for city governments in order to achieve sustainable urbanization.

The first ever U20 Mayors Summit which concluded today in Buenos Aires, brought together leaders of 37 major cities committed to enhancing the role of local governments in global policy-making, enriching global debates with local solutions and raising the local perspective in the G20 global agenda.

“The First Urban 20 Mayors Summit was a success, demonstrating the commitment of the G20’s main cities to contribute with concrete solutions to the development agenda. During one and a half days, we were able to put together a series of ideas and recommendations to enrich the G20 agenda from a urban perspective. This is no small achievement. Urban20 is a milestone in what global cities have sought for many years: to have a say in the most pressing issues of the global development agenda”, said Horacio Rodríguez Larreta, Mayor of Buenos Aires City.

“Cities are where the future happens first. Citizens are working with city leaders to create the future that we want, and now is the moment for G20 leaders to listen to their voices,” said Anne Hidalgo, Mayor of Paris and Chair of C40. “There is no issue that affects citizens more urgently than climate change. Cities are committed to deliver on the Paris Agreement and we call on the world’s most powerful nations to join us in this crucial effort. Together we must transform our cities and the world.”

Urban 20 is a city diplomacy initiative launched in December 2017 by Horacio Rodriguez Larreta, Mayor of Buenos Aires, and Anne Hidalgo, Mayor of Paris, that brings together cities from G20 member states to discuss global economic and development issues, form a common position and issue recommendations for consideration by the G20. The initiative is convened by C40 Cities, in collaboration with United Cities and Local Governments. 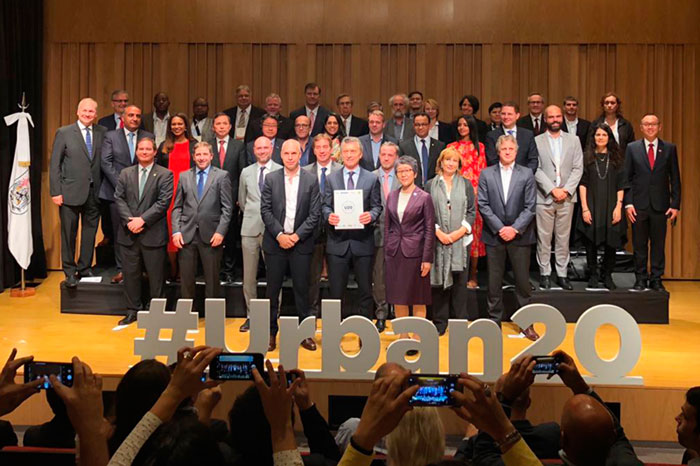