New hydropower plant protects nature as well as the climate

The world’s first shaft hydropower plant has gone on stream in Germany. As well as producing green energy, the plant is also kinder to the natural environment than conventional hydropower plants. The turbine is concealed in a shaft in the river bed. Fish can pass freely over the power plant on their migration downstream. The new plant concept was developed at the Technical University of Munich (TUM).

A source of renewable energy, hydropower plants can contribute to climate mitigation efforts, but they also cause problems for the natural environment. In conventional run-of-river power plants, the water is diverted to a power house in order to drive the turbine. This strong current can drag fish towards the plant turbine and grids, where they are at risk of being injured or killed. Natural habitats, fish migration routes and riverbank landscapes are damaged. Therefore, the environmental standards for new plants are virtually impossible to fulfill in Germany and many other countries.

A team at the Chair of Hydraulic and Water Resources Engineering at TUM decided to develop a hydropower plant that would have a significantly lower impact on the natural environment. With this new plant design, there is no need to divert the course of the river. Instead, a shaft housing the turbine and the generator is dug into the river bed upstream of a weir. The water flows into the shaft, drives the turbine, and is then returned to the river under the weir. A smaller part of the water flows over the shaft and past the weir.

The engineers have managed to control the current so that the power plant can efficiently produce electricity while minimizing the formation of vortices in the shaft. Numerous tests on a prototype have shown that most fish are able to swim safely over the shaft. What is more, two openings in the weir allow them to migrate downstream unharmed, while upstream migration is facilitated by an ordinary fish pass.

How the shaft power plant works

As well as protecting the fish in the river, the shaft power plant further benefits the aquatic ecosystem by also allowing debris and driftwood to pass more freely downstream. The transit and deposition of this “bedload” is important for spawning grounds, for example. A type of grate called a rack, which lies on the shaft, keeps this material away from the turbine. The bedload is then regularly pushed downstream by the plant. For this purpose a gate is opened in the weir. This adjustable system also allows water to be released when the river floods.

“If we want to protect the climate while also preserving nature, we need to develop technologies capable of skillfully balancing these two goals,” says project leader Prof. Peter Rutschmann. “We know that nature is always impacted to some degree by a hydropower plant.” Here too, very small fish can be dragged into the shaft power plant, but the majority of them make it to the other side unscathed.

Compliance with extremely strict environmental standards meant that permission was granted to build the first shaft power plant in a nature reserve (Natura 2000 area). The fish migration routes on the river Loisach in Bavaria were even improved by the construction. The power plant was built by a municipal utility company at an existing ramp which until then had been difficult for fish to pass through. There was no need to build a new weir for the project. The plant is generating enough electricity for approximately 800 households and thus makes a contribution to a decentralized energy supply. It has already been successfully supplying the grid since spring and has been proven during a flooding event.

The shaft power plant is suitable for different sizes of river as well as different heights of fall. Depending on demand, electricity can be generated in multiple adjacent shafts. Two shafts have been excavated in the Loisach, the fall height is 2.5 meters.

TUM holds several patents for the invention. A spin-off of TUM, Hydroshaft GmbH headed by the concept creator Albert Sepp has acquired rights of use and licenses the technology to power plant operators. A total of twelve plants are currently at the planning stage in Germany.

“We can expect to see several new hydropower plants being built around the world, many of them in regions with a high level of biodiversity,” says Peter Rutschmann. “The shaft power plant concept can help to preserve rich river-based habitats.” 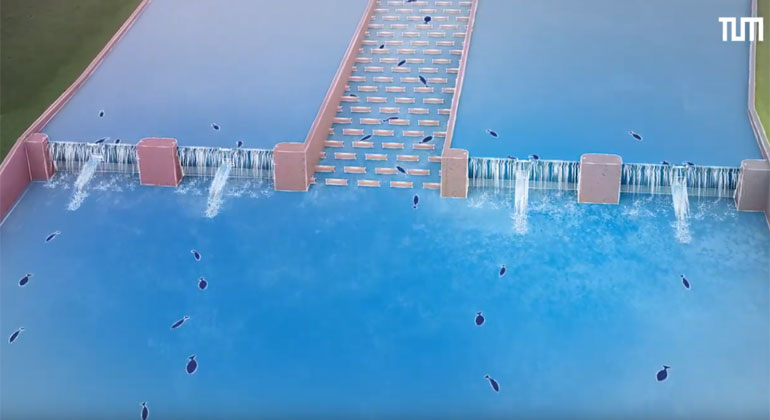