A global, 100% renewable electricity system can be achieved by 2050. A recent study by LUT University describes the steps required to enable a realistic transition that prevents societal disruption.

The research article “Radical transformation pathway towards sustainable electricity via evolutionary steps” was recently published by the leading journal in natural sciences, Nature Communications. It is the first time in the history of the journal that a research article in the field of 100% renewable energy is published.

A transition towards long-term sustainability in global energy systems based on renewable energy (later also “RE”) resources can mitigate several growing threats to human society simultaneously: greenhouse gas emissions, human-induced climate deviations, and the exceeding of critical planetary boundaries. However, the optimal structure of future systems and potential transition pathways have so far remained open questions.

The recent LUT research article published in Nature Communications describes a global, 100% RE system, which can be achieved by 2050, and the steps required to enable a realistic transition that prevents societal disruption. Modelling results show that a carbon neutral electricity system can be built in all regions of the world in a technically feasible and economically viable manner. This radial transformation will require steady but evolutionary changes for the next 35 years, and will lead to sustainable and affordable power supply globally.

The modelled transition starts from the existing power system structure as of 2015, and existing capacities are decommissioned only after reaching their technical lifetimes. The speed of RE capacity deployment is limited to avoid an unrealistically fast transition and is based on empirical data. For each transition step, linear optimisation of the power system is performed, with a target of minimum annualised system cost under given constraints.

Levelised cost of electricity (LCOE) lower in 2050 compared to today

Modelling results show that a 100% carbon neutral RE-based electricity system is possible by 2050. Such an energy system is economically viable, at a levelised cost of electricity (LCOE) of 52 €/MWh. “This is substantially less the the present 70 €/MWh”, says Christian Breyer, head of the Solar Economy group at LUT. Breyer continues that by 2050, solar photovoltaic (PV) will be the main source of electricity, generating almost 70% of all electricity, and wind nearly 18%.

“This leads to solar PV dominated electricity supply in most regions, especially in the Sun Belt, a few wind or hydropower dominated regions and several regions characterised by a mix of the three main renewable electricity sources, mainly in the northern hemisphere such as North America, Europe and Eurasia” says Dmitrii Bogdanov, lead researcher for this study.

The transition modelling was performed with the LUT Energy System Transition model, which optimises an energy system for given constraints. The simulation is applied for 5-year time periods for the years 2015 to 2050. For each period, the model defines a cost optimal energy system structure and operation mode for the given set of constraints: power demand, available generation and storage technologies, financial and technical assumptions, and limits on installed capacity for all applied technologies. The model is based on linear optimisation and performed in an hourly resolution for an entire year.

“It’s obvious that the transition towards a 100% renewable electricity system will demand radical changes in system structure. Technology and generation mixes will change drastically, while a new storage sector will emerge. We have, however, shown that the transition is possible. Our cost asuumptions for PV based electricity and battery cost are based on more realistic cost projections than the ones in previous research”, concludes Breyer. 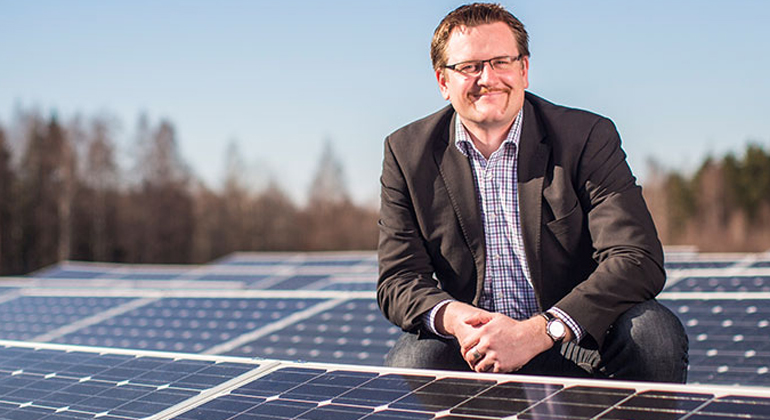