MIT and Northwestern researchers create hybrid perovskite materials that could help improve the quality of solar cells and light sources.

A team of researchers from MIT and Northwestern University has demonstrated the ability to fine-tune the electronic properties of hybrid perovskite materials, which have drawn enormous interest as potential next-generation optoelectronic materials for devices such as solar cells and light sources.

The materials are classified as “hybrid” because they contain inorganic components like metals, as well as organic molecules with elements like carbon and nitrogen, organized into nanoscale layers. In a paper published online this week in Nature Chemistry, the researchers showed that by strategically varying the composition of the organic layers, they could tune the color of light absorbed by the perovskite and also the wavelength at which the material emitted light. Importantly, they accomplished this without substantially changing the inorganic component.

“Until now, most experimental and theoretical evidence indicated that the organic layers simply act as inert spacers whose only role is to separate the electronically active inorganic layers,” says Will Tisdale, the ARCO Career Development Professor in Energy Studies at MIT and co-corresponding author on the paper. “These new results show that we can teach the organic layer to do much more.”

“Our laboratory has been interested in the design of novel hybrid materials that combine inorganic and organic components in order to create synergistic properties, and this is precisely what we have done in this work on the exciting energy materials known as perovskites,” says Samuel Stupp, Board of Trustees Professor of Chemistry, Materials Science and Engineering, Medicine, and Biomedical Engineering at Northwestern and co-corresponding author on the paper.

Perovskites, first discovered as naturally occurring minerals in the Ural Mountains almost 200 years ago, have been investigated vigorously in the past decade after it was determined that they could turn light into usable electricity. These materials are considered a possible key to a sustainable energy future because they are less expensive to manufacture than the popular silicon-based solar cells, and can convert light to electricity nearly as efficiently.

However, perovskite solar cells are far less durable and stable in outdoor conditions due to their sensitivity to heat and moisture. Scientists have recently found that splitting the traditional 3D structure of perovskites into many thin layers — ranging from a few atoms thick to dozens of atoms thick — improves stability and performance.

In layered perovskites, the inorganic layer absorbs light and produces the charges that eventually are needed to produce electrical energy. The organic layers typically are insulating and act like giant walls preventing the light-generated charges from moving out of the inorganic layer.

“This collaboration has been exciting because the materials that the Stupp group sent to us from Northwestern were exactly in line with the questions we were asking at MIT, about how excitons in the inorganic layers of the perovskite could be influenced by the properties of the organic layers,” says Katie Mauck, a former postdoc in the Tisdale group and now an assistant professor of chemistry at Kenyon College. Along with James Passarelli, a graduate student in the Stupp group, she is a co-first author of the paper. “James’ modular approach to the perovskite synthesis enabled us to controllably tune the interaction between these layers and study the effects on exciton dynamics in depth, through spectroscopy in the Tisdale lab.”

“When light is absorbed by semiconductors such as perovskites, electrons with their negative charge acquire energy and move away,” Stupp says. “This sets up an attractive force with the positively charged sites they leave behind, since matter wants to be neutral. We were able to control the magnitude of this force by incorporating specific types of molecules within the organic layers, which in turn modifies their interesting properties.”

The Northwestern-MIT collaboration began after a chance encounter between Mauck and a Stupp lab member at a scientific conference in summer 2018. The Stupp laboratory had previously performed pioneering work on the synthesis of inorganic-organic hybrid materials for potential applications in energy and medicine, while the Tisdale group specializes in using lasers to probe the properties of nanomaterials.

These interests overlapped perfectly for this project, as the Stupp group developed the hybrid perovskite structures and the Tisdale group performed the precise spectroscopic measurements necessary to confirm the interactions within the systems.

In the future, the ability to fine-tune the electronic properties of these materials could be applied to various optical or electronic sensors — including molecular sensors that take advantage of the presence of organic layers — as well as solar cells and light detectors.

“In addition to a pathway toward improved optoelectronic devices, this work underscores some of the unique advantages of nanoscale semiconductors, which are more sensitive to their surrounding environment than bulk materials,” Tisdale says. “The lessons we’ve learned in the context of hybrid layered perovskites can be extended to many other emerging materials.”

This work was supported by the U.S. Department of Energy, Office of Science, Basic Energy Sciences and the Center for Bio-Inspired Energy Science, an Energy Frontiers Research Center. 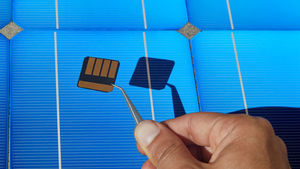