Permafrost makes up a quarter of the landmass in the Northern Hemisphere. Climate change means that Arctic coasts are thawing and eroding at an ever greater pace, releasing additional greenhouse gases.

A large EU project, coordinated by the Alfred Wegener Institute Helmholtz Centre for Polar and Marine Research (AWI), is now exploring the consequences for the global climate and for the people living in the Arctic. But that’s not all: working together with residents of the Arctic region, the researchers will also co-design strategies for the future in order to cope with ongoing climate change.

The sheer size of permafrost regions make them a global issue. A quarter of the landmass in the Northern Hemisphere consists of permafrost soils, which have been frozen solid for thousands of years. A third of the world’s coastlines are permafrost and span Alaska, Canada, Greenland, Norway and Siberia. Researchers have known for years that the permafrost is thawing ever more rapidly due to climate change. Yet we still don’t know exactly what consequences this will have for the global climate, or for the people living there. In the EU project Nunataryuk experts from 27 research institutions will spend the next five years intensively answering this research question and determining the role of permafrost coastlines in the Earth’s climate system.

Nunataryuk is unique because the scientists collaborate closely with local communities to determine how they can best adapt to thawing permafrost. “What makes the project stand out is the fact that we’ll study both the global and the local impacts of this thawing, with co-designed projects in local communities,” says AWI geoscientist Hugues Lantuit, the project’s coordinator.

Permafrost soils contain ancient, frozen organic matter. If permafrost begins to thaw, bacteria breaks down the organic matter, releasing large amounts of carbon dioxide and methane. This leads to greater warming of the Earth’s climate. How much warming is unclear, because many of the processes associated with permafrost thaw are not understood. In climate models, thawing permafrost has only been partly included.

“The models view the permafrost as a uniform field, thawing from the top down, but that’s too simple,” Lantuit explains. “For example, on coastlines, permafrost is increasingly crumbling due to the effects of waves. The Arctic coastline is now receding by more than half a metre every year. The models don’t take this into account.” In addition, the thawed soil, together with all of its carbon and nutrients, is now increasingly being transported to the Arctic Ocean by rivers and streams. This factor isn’t reflected, either. There’s yet another major question mark: the Arctic is home to large permafrost beneath the ocean floor. And we essentially have no idea how rapidly these areas thaw in the wake of climate change.

“In the project, we will for the first time feed a comprehensive map of this area into climate models,” says Lantuit. To gauge how much greenhouse gas is being released by coastal areas and the seafloor, aeroplane and helicopter flights will be used to measure the carbon dioxide and methane levels in the air. Lantuit adds: “Only then will the climate models be able to better estimate the thawing’s effects on the Earth’s climate. In addition, one of the project teams will be tasked with determining the future environmental costs that we can expect to see in the future – in other words, the costs of permafrost thaw to the global economy.”

People living on the coasts of permafrost regions are already at risk: if the ground becomes too soft and fails, they lose their homes. Water pipes can break. In some places, oil and gas lines have already started to leak, and soils are contaminated. Also, the increased load of organic material coming from eroding permafrost soils at the coast is changing the marine habitat – in the best case, this could increase the amount of nutrients available to marine organisms, especially fish. On the other hand, it might harm the ecosystem. In addition, contaminants and pathogens that have remained frozen in the soil for millennia could find their way into coastal waters.

“All of these aspects are of course very important to local populations, which is why we’ll work together with them over the next five years to devise new strategies and solutions,” Lantuit explains. To make that happen, the soils will be precisely surveyed and mapped, so as to identify areas that are thawing only slowly, or are solid and firm, providing locations where new houses can be safely built. “We’re especially happy that the indigenous populations, which have lived in these regions for thousands of years, are also actively involved,” says Lantuit. As a symbol of this proactive type of cooperation between researchers and indigenous people, the EU project was dubbed “Nunataryuk”. In the language of the Inuvialuit, who live in the western Canadian Arctic, it literally means “from land to sea”; the nearest English equivalent is most likely “coast”. 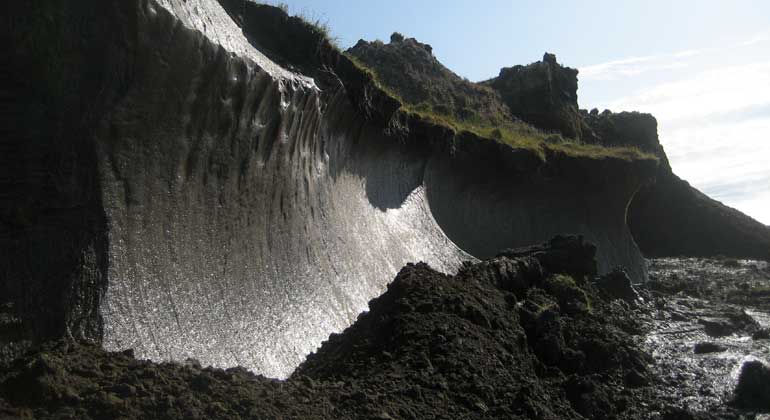 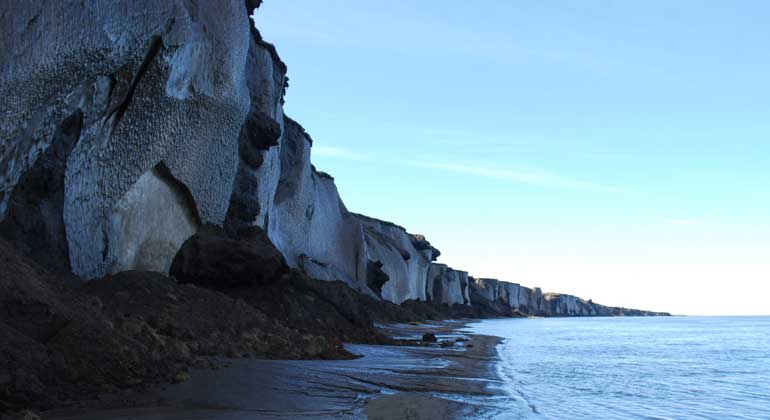 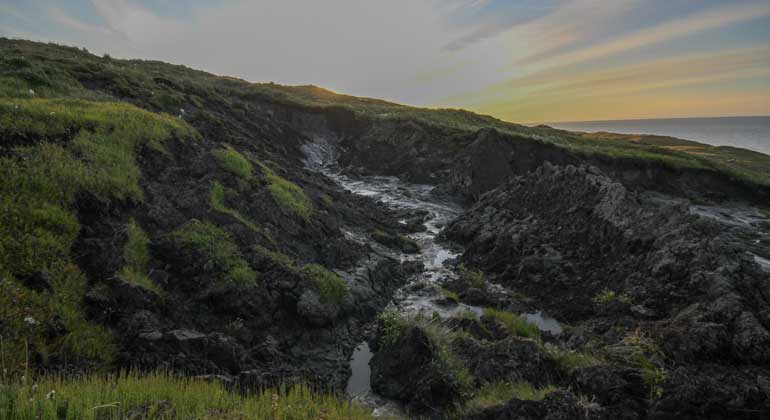