Snow falls gently on a fairytale landscape, covering it with white flakes. The well-known concept behind the miniature snow globe was developed in Vienna in the 19th century. A similar principle, called “Snow Globe Coating” is now being applied to solar cells to increase their efficiency. This method was developed by the staff scientist Dr. Angelika Basch at the University of Applied Sciences Upper Austria in Graz. Currently it is being further developed in cooperation with the Fraunhofer Institute for Solar Energy Systems ISE in Freiburg.

For Snow Globe Coating, particles of titania, a white material with a high refractive index, are finely distributed in a liquid and are brought to fall by gravity. Upon drying, a self-organized coating is formed, which unlike conventional paints contains no binders and is therefore highly reflective. When applied to the back side of solar cells, this coating allows even more sunlight to be absorbed and converted into electricity.

The new method developed by Dr. Angelika Basch was nominated for the Austrian Inventum Award “Invention of the Year” 2013 and reached the top ten.

In a cooperative effort, Snow Globe Coating is presently being tested on highly efficient bifacial silicon solar cells by Dr. Jan Christoph Goldschmidt and his team at the Fraunhofer Institute for Solar Energy Systems ISE (Freiburg). The results show that often a simple method, like Snow Globe Coating, carried out with the most basic laboratory equipment, can lead to appreciable improvements in solar cell efficiency. The German-Austrian research team plans to further develop this promising approach in the future with the help of partners. 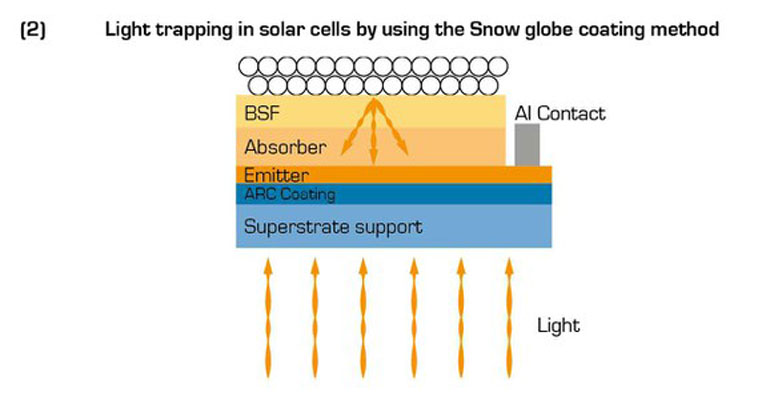