Laboratory analysis of water and snow samples, gathered during a recent Greenpeace expedition to the Antarctic, has revealed the presence of microplastics and persistent chemicals, respectively, in the majority of samples tested.

“We may think of the Antarctic as a remote and pristine wilderness,” said Frida Bengtsson of Greenpeace’s Protect the Antarctic campaign[1], “but from pollution and climate change to industrial krill fishing, humanity’s footprint is clear. These results show that even the most remote habitats of the Antarctic are contaminated with microplastic waste[2] and persistent hazardous chemicals. We need action at source, to stop these pollutants ending up in the Antarctic in the first place, and we need an Antarctic Ocean Sanctuary to give space for penguins, whales and the entire ecosystem to recover from the pressures they’re facing.”

Seven of the eight sea-surface water samples tested contained microplastic, such as microfibres (at least one microplastic element per 1 litre sample). In addition, nine samples were taken using a manta trawl[3] and analysed for microplastics. Microplastic fragments were detected in two samples. Seven of the nine snow samples tested contained detectable concentrations of the persistent chemicals per- and polyfluorinated alkylated substances, or PFASs. These chemicals are widely used in many industrial processes and consumer products and have been linked to reproductive and developmental issues in wildlife. The snow samples gathered included freshly-fallen snow, suggesting the hazardous chemicals were deposited from the atmosphere. See here for the full Greenpeace International report.

There are relatively few data for microplastics in Antarctic waters, and this analysis provides valuable new information on the presence and status of such contamination in the region.

“We also saw all kinds of waste from the fishing industry down in the Antarctic,” Bengtsson continued. “Buoys, nets and tarpaulins drifted in between icebergs, which was really sad to see. We took them out of the water, but it really made clear to me how we need to put vast parts of this area off-limits to human activity if we’re going to protect the Antarctic’s incredible wildlife.”

“Plastic has now been found in all corners of our oceans, from the Antarctic to the Arctic and at the deepest point of the ocean, the Mariana Trench. We need urgent action to reduce the flow of plastic into our seas and we need large scale marine reserves – like a huge Antarctic Ocean Sanctuary which over 1.6 million people are calling for – to protect marine life and our oceans for future generations.”

The samples were gathered during a three-month Greenpeace expedition to the Antarctic from January to March 2018. Greenpeace was conducting scientific research, including landmark submarine dives to little-known Antarctic seabed ecosystems, as part of a campaign to create an Antarctic Ocean Sanctuary. At 1.8 million sq km, it would be five times the size of Germany and the largest protected area on Earth. The sanctuary is being proposed by the EU and a decision will be taken at the forthcoming meeting of the Antarctic Ocean Commission (CCAMLR) in October 2018.

For the full technical report on the sampling and analysis, see 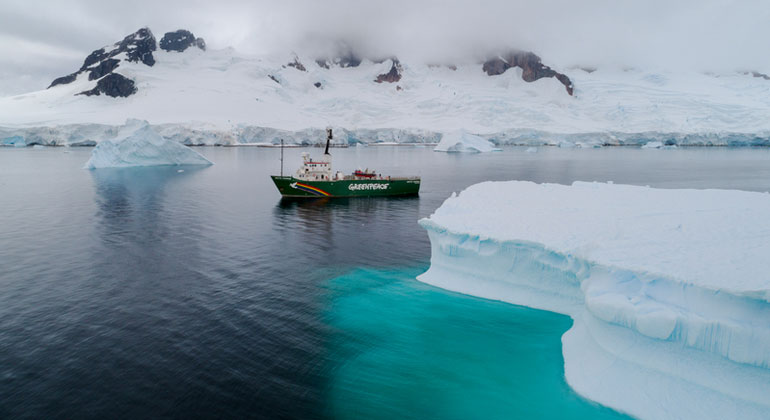